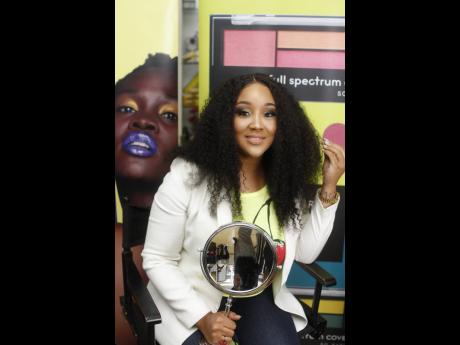 Dancehall artiste Tifa continues to break new ground in the endorsement realm after recently being named the face of CoverGirl Jamaica.

The entertainer, who made the announcement via social media late last week, described the new partnership as a "big deal".

Tifa, who has had several endorsement deals from corporate companies throughout her career, says she is excited to join the list of international celebrities as a face for the global make-up brand.

"It's an awesome feeling to be the face of CoverGirl for Jamaica. CoverGirl is an international make-up line, international brand. A lot of icons have been 'CoverGirls', Queen Latifa, Issa Rae, Zendaya, Pink and Katy Perry, just to name a few. And so to be the face for and of Jamaica is definitely a humbling an awesome feeling," she said. "As an ambassador, clearly I'll be a part of advertising. I'll be used on Instagram and in other advertising methods to increase sales, the typical brand ambassador stuff. I'll also be visiting CoverGirl locations across Jamaica and in other countries to generate hype and attention surrounding the brand in Jamaica."

Tifa says her deal with CoverGirl extends beyond advertising and sales but that it's a little too early to spill any specific details.

Andrea Blake, brand manager for CoverGirl Jamaica, said Tifa was selected not just for her success on the local music scene but also because she continues to represent Jamaica in a positive way overseas.

She described Tifa as the consummate professional and said the entertainer's values and goals as an individual will align perfectly with the brand.

"Tifa has been very successful in her craft. She continues to represent Jamaica on the international stage and is a role model to so many Jamaicans. Tifa exemplifies the true nature of our slogan, #IAmWhatIMakeUp," Blake said.