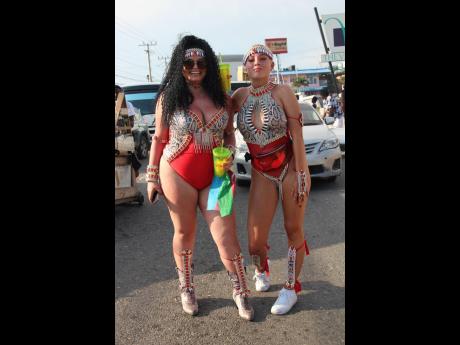 Jasmine Palmer, the founder and designer of Xquisite Mas Carnival Troupe, that launched its masquerades in France, Netherlands and the United Kingdom only one year ago, returned to Jamaica for a little inspiration.

“It is not my first time jumping carnival with Bacchanal Jamaica,” said Palmer, who sported a red bejewelled monokini with snakeskin accents at yesterday’s Road March.

Palmer resided in Jamaica from 2016 to 2018, working as a humanitarian. It was then that she was motivated to start a band in Europe, taking elements of the local celebration of carnival, the eclectic mixture of music and costume designs.

“My costumes are high-quality hand-made, while the celebration is easily described as an exquisite carnival that delivers world- class concepts and service, like Bacchanal, which I am jumping with for over three years,” Palmer said. “Bacchanal stays authentic in comparison so I always come back to support that band.”

The only backlash Palmer has received is from friends and family questioning her involvement in carnivals that demonstrate sexually explicit behaviour corresponding to equally vulgar music, because she is a baptised Christian.

“I get asked a lot as a Christian my reasons for wanting to do this but this celebration makes me blessed to share passion and love which is a blessing to others; passion and love is part of the life God gave people and nothing about that goes against Christianity,” she said.

She says the nakedness is the least, “It expresses another gift,” but at the same time she is cautious not to indulge in any bad behaviour.

“I will be leaving with great ideas and feeling like my trip has been worth it; maybe I can create partnerships to have a stronger Caribbean presence, including artistes from Jamaica and Trinidad in the future,” she said.