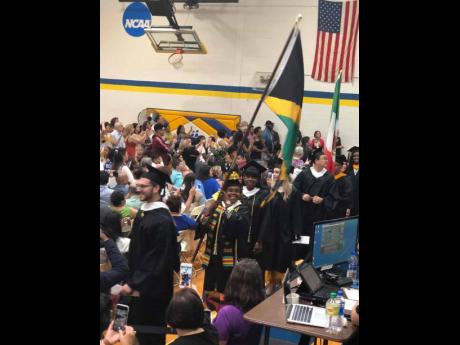 Though she has been living in the US for the past few decades, former dancehall star Shelly Thunder takes many opportunities to boast her nationality.

Earlier this year, she took the opportunity to brandish Jamaica's flag as she marched across a stage to collect her bachelor's of arts in behavioural science.

Currently a human resource manager, the mother of three (and stepmother to two others) acquired the degree at age 54.

Impressively, she completed the programme in three years instead of four.

"Now that I have another year, I'm just gonna do another year ... I intend to do my master's in one," she told THE STAR.

Shelly Thunder, whose given name is Michelle Harrison-Timol, was popular in the dancehall at the turn of the '90s with her singular dancehall album Fresh Out the Pack, featuring songs like Kuff and Break Up.

But she has long given up the lifestyle. Since getting baptised in 1995, she has been living a quiet life in Connecticut with her husband and children - and delivering the gospel in church.

"I used to preach every fourth Sunday in my church, but when I went back to school I was preaching on fifth Sundays," the former dancehall star revealed.

Shelly hasn't looked back at her dancehall past, but that hasn't stopped many others from revisiting her hits.

"It's fascinating to me that people still listen to that, because I don't listen to myself. I don't even watch my videos. My kids are like 'Why?!' I don't know. It's just not a thing to me. And my kids listen to Beres Hammond and everybody. I'm surprised that they're so Jamaican, culturally. That fascinates me. I remember when they were young, they would tell people that they're Jamaicans. Like, they're not Jamaicans! I don't understand!" she laughed.

He said: "I think it's important that people know whatever age you are, you can do it and do it well. I want to let people know she's not just a deejay, but a smart girl! She got to wave the Jamaican flag at graduation and make her country proud."