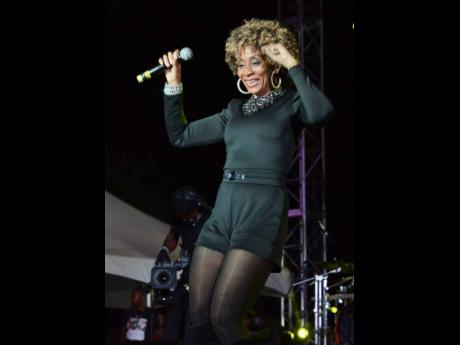 When Reggae Sumfest had its introductory staging in 1993, Nadine Sutherland was already riding the waves of ' Action,' a hit feature with Terror Fabulous. That same year, the ' Wicked Dickie' remix with Buju Banton soared to number one on the reggae chart, and added to the strings of hits to come, including ' Babyface,' ' Man Haffi Wicked' (with Spragga Benz), ' What Am I Gonna Do' (with Banton) and ' I'm In Love.'

Despite her tenure and contribution to Jamaican music, as well as her engaging, all-rounded performances, the singer has never performed on Reggae Sumfest.

Speaking to T he STAR, Sutherland revealed that she has always wanted to perform on the festival, but was never called.

"It's been a question people have asked me because I have big tunes, it is a big mystery that I don't allow myself to delve into and I just dismiss it now, but they've never invited me to Sumfest. They probably think I'm not current, but my songs are current," she said.

This has not affected her thoughts on the show, neither its promoters. Sutherland said the event provides a good opportunity for artistes to showcase their talent.

"Sumfest is a wonderful stage and I would love to be a part of it. I think I deserve to be part of a lot of these shows, but I don't know what the issue is," she said.

"I'm a great performer, my songs have lasted through the test of time, but it is what it is. It's not really something that bothers me anymore. It used to bother me back in the day, but as you grow as a woman and love yourself more and respect yourself, there is nobody in the world that can tell me anything about myself as an artiste or performer.

"I think I'm a damn badass singer/performer; I rock the show, I rock the crowd, I have the hits, nobody can deny that. I think I'm one of the best there is and if you don't want me, I will not be knocking on your door. I'm not starving and I made sure I did my masters, so I can't starve, ever, in my life."

The entertainer holds a master's degree in cultural studies from The University of the West Indies. She returned to Jamaica last year after spending more than a year at the Challenge Preparatory Charter School in New York, where she served as director of performing arts. Dubbing herself a fan of music, she still records and sizzles on stage. Her latest single, Never In Love, has been picking up steam in recent months, two years after its release.