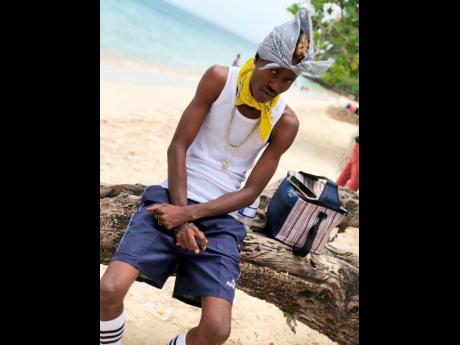 It was nearly impossible to scroll through social media in early February without stumbling across a video of St Thomas native Beez Hive break-dancing while singing the lyrics to his viral 'Beez Hive' single.

The pompously humorous number received justice in late January after comedian Facebook Hero posted a parody of the six-year-old song, starting the engine to what appeared to be a possible mainstream career for the deejay.

Now, in mid-2019, the sprightly entertainer no longer floods the news feed of what is trending online, but he is still making music.

"I'm still here pushing new songs like Bubble fi Di Beez, which I'm getting good feedback from the fans 'cause dem love me, and I'm a real hard worker," he told THE WEEKEND STAR.

"I also have a new dance called Spiral. It bad, and mek yuh shake up yuh foot dem. Facebook Hero tek it to the world again, Shenseea dem love the style, and all Popcaan waan par wid me. So, a Nicki Minaj dem mi waa get to now. Right now, mi just need the right manager to help me industry-wise, 'cause the manager I had before was my brother, and he is a teacher."

Since gaining popularity, he has brought his lightning footwork and theatrical antics to events like MoBay Crab Fest and MoBay Jerk & Food Festival. He has even moved to St Elizabeth, based on the demand for him in the western end of the island.

Though most patrons may only know him for his breakout single, Beez Hive said he can easily top the comical track.

"It's easy for me to do it; easy like one, two, three," he said. "A whole heap of competition in the industry. From my song go viral every entertainer get busy 'cause, yuh done know, a competition, but we have more hit songs fi touch the road right now. A just the help we need."

He added that he will continue to create positive music to inspire youth.

"A di kids dem buss mi enuh, women too. But a really di baby dem love mi songs and always a sing dem, so mi have a platform fi di youths dem," he said. "I'm not going to promote no violence or crime. That is not my priority. My thing is to make the people and young people move. From dem see me dem excited."