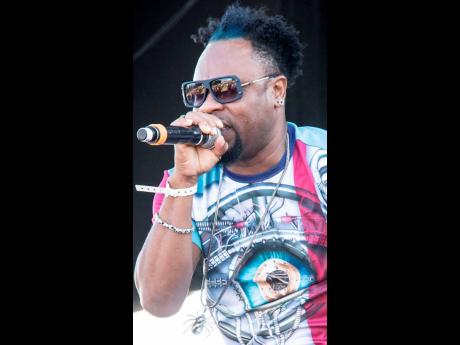 "Y ou can't be a 'kidd' all the days of your life," CK Pragmatic told THE WEEKEND STAR. For this reason, the old-school deejay has retired the moniker Cement Kidd that he has used since he first emerged on the scene in the mid-90s.

The new name accompanies a new style as the deejay, who is known for a more secular sound (evident on tracks like Dem Fi Know Seh, Head Need It and In Di Mood), is charting a more conscious path.

"Cement Kidd is a unique name, but it limited me at some point, a lot of people used to ask me, 'What kind of artiste are you?' because I used to do everything," he said. "I'm a big man now and I changed my name because I've grown. Since I've been working with Peligro Music, I started tapping into a more positive side of me, and people like that. I started with a song name Chapter A Day . It's like a prayer, basically. Then I moved on to O pportunity. Then I have a song called Blessing. It's just a trend of positive music coming forward."

The songs will be featured on his upcoming album, CK Pragmatic: The Next Chapter, scheduled for release by year end.

He revealed that the songs are being well-received, and Opportunity, a song highlighting the importance of helping youth to better their lives, is living up to its title.

"The New York Job Expo reached out to me to use the song as its theme song this year," he said. "It's also getting steady rotation and getting the support from selectors and female disc jocks, and it is always good to have the support of females."

CK Pragmatic formed the name Cement Kidd from his idolisation of Papa San and his child-like frame.

He was the opening act for Lady Saw (now Minister Marion Hall) on her promotional tour for the 1997 Passion album.

Without a hit single at the time, he held his own on a tour line-up including General Degree and Frisco Kid.

CK Pragmatic later established himself with the track Black Suit and Tie, produced by Manatee Records.

Now based in Brooklyn, he is focused on promoting his new brand.

"I haven't disabled my Cement Kidd Instagram page, but I have a new page for CK Pragmatic that is growing and getting better," CK Pragmatic said. "I'm just focused on getting my fans updated on the new name and we have new songs to roll out as the year goes on."