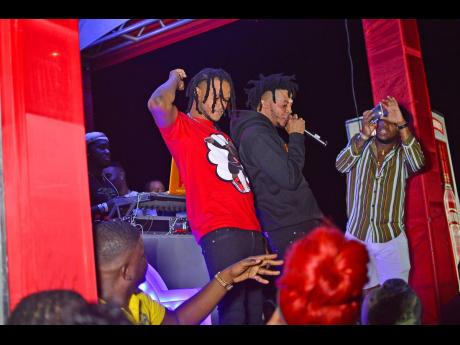 Narkoz in performance at Wet Nipples at the Pool Side in Harbour View, St Andrew, in March. 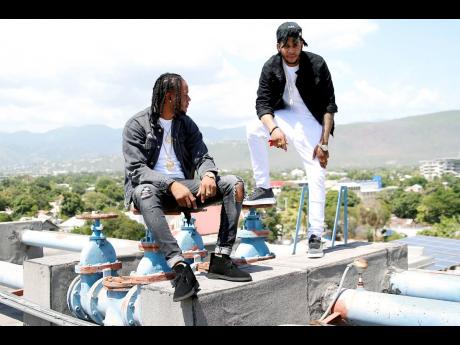 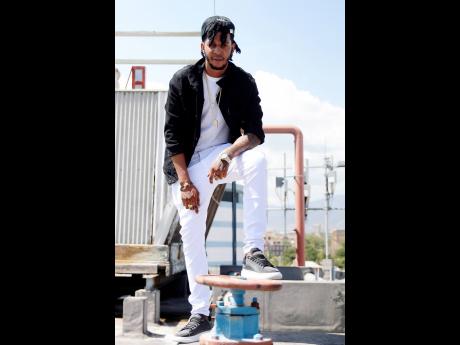 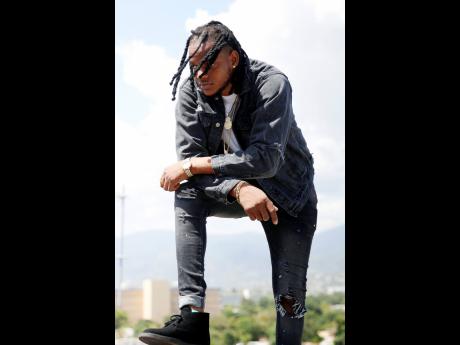 Propelled to fame by one viral Snapchat clip, NarKoz, dancehall's hottest duo, is ready to 'take over the world'. Comprised of brothers Quaiboss, 27, and Chancelawd, 24, the NarKoz hails from east Kingston and by sheer luck has captured and kept the attention of young fans islandwide.

Released just three months ago, their first music video, Boasy, has climbed to more than half a million views on YouTube. Now, after just one week online, their second video, White Tees, has climbed past the 100,000-view mark.

For relatively unknown acts, the numbers are impressive - and they told T he WEEKEND STAR exactly how they did it. Apparently, the views are all thanks to the kids.

"In a white tees and mi jeans,

Dawg, she say she ready fi do anything mi please."

In the music video, young children can be seen and heard singing happily along to White Tees, which may make some people uncomfortable. NarKoz acknowledged the display as a testament to how catchy their music is and, therefore, how appealing they are to a youthful fan base.

"On the day of the video shoot, kids were there, and like 20 mintues into shooting the scene, dem start sing it - an a first dem a hear it," Quaiboss said.

"The song kept playing over and over, then the kids just pick it up and start sing, and they catch it," NarKoz older brother and manager, Nathaniel Brown said.

At face value, the lyrics seem explicit - but the talents and their manager suggest that the words should be more metaphorically interpreted.

"Persons misconstrue the lyrics. It actually makes reference to the fact that when you're out there in the streets, you're defensive. You're always ready. If you think about what the song says, it says, ' one inna di head, point and squeeze'. It's not saying 'a gunshot in a man's head'. It says one is in the chamber, so all you need to do is point and squeeze. That doesn't mean NarKoz is saying they have guns on them and them ready fi shoot somebody. They're just saying they're always ready, prepared, and vigilant when they're out there in the streets," Brown said.

But how did they get view counts past the half-million mark on a debut music video? It was because of Snapchat.

"We did a promote it, the whole team, every night. But it never really a gi we the energy wah we want, so we release the next song name Boasy. Boom Boom was the first one to start play it. And it start mash up the street - and that's from last year. Then we did have an event. We just deh inna di car and Snap to the song Take Over The World. It never release yet or nothing. But seeing as the cartoon characters dem inna the song, the younger kids love it. It just get out, and my Instagram start blow up," Quaiboss shared.

Two weeks before that, they had shot the music video for Boasy. He continued: "That video shoulda release, but Take Over The World get outta hand. It go viral. Dunoon Technical, Camperdown High, islandwide - every school a kill up themself over Take Over The World. So when the Boasy video drop, it just gone. It done a play inna the street and a play pon radio."

NarKoz has been pursuing music for the past six years.

"It just inna di bloodline. Jackie Brown ( Send Me The Pillow, 1975) a we grandfather. Music was always in the blood, but after we lose a bredda, we took it seriously. We always in the studio a work. Two years, we just deh inna the studio, never come out. We a guh take over the world, and we have the music that can do it. We have about 50 songs recorded - all of them, from our point of view, hits," Quaiboss told T he WEEKEND STAR.