Symatic says he is lucky to escape machete attack 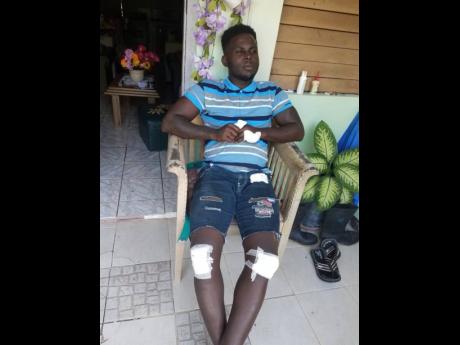 2017 Magnum King winner Symatic had to seek treatment after claiming he was attacked by a former associate.

The 2017 Magnum King, Symatic, says he was attacked and cut by someone he called a friend last Sunday.

The singjay said he was walking in his Jacks River, St Mary, community, when he was approached by a male friend who attempted to chop him with a machete.

"Him send a machete after me and I had to dodge it and fight back, and eventually the cutlass cut my hand-middle and I got some more bruises as we were tussling," Symatic told THE WEEKEND STAR. "I was attacked by this person over jealousy. He is non-productive and because him always see that I am striving towards something good, him don't like that at all. This person was very close to me and envied my every movement."

He said he was treated at the Port Maria Hospital and claims to have filed a report with the police.

"I am feeling much better. Now I just have to watch the movements of the people in my circle and keep it small same way," he said.

"The international sound is deliberate, the majority of people don't know I can sing and I wanna put it across that I am not only a deejay but a natural born singer," he said. "I really want to break on the international scene because my management team, Madstorm Records, is based abroad, so it naturally complements my mainstream goals."

Symatic, given name Rodane Oliphant, inked the deal three months ago, which is a victory for the artiste who says finding the right team has been difficult since his Magnum feat.

"The journey since Magnum has been full of ups and downs as I was trying to do a lot of work with different producers and a whole lot of recordings, and it was difficult to find good people to work with. The hard work is finally paying off," he said.