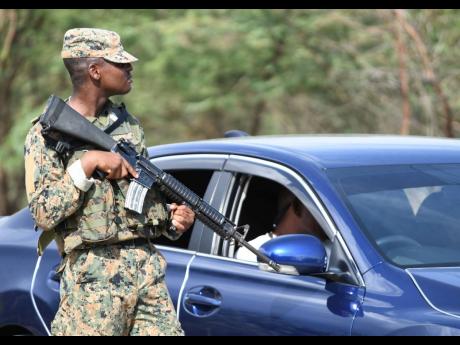 A member of the Jamaica Defence Force mans a state of public emergency checkpoint. 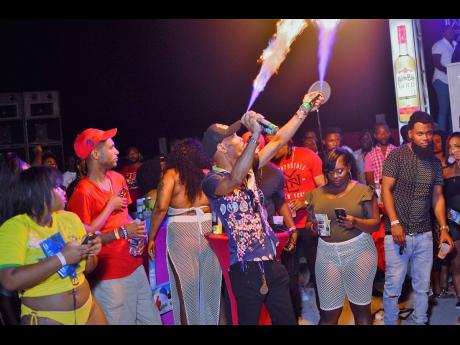 Patrons enjoying a staging of Skimpii at Ultra Beach in Portmore last year.
1
2

W ith the state of public emergency (SOE) in place for St Catherine and Clarendon, Portmore event promoters are now seeking alternatives to host parties in the Corporate Area, in hopes of saving their investments.

Some have even postponed their parties to later dates or have made the difficult decision to simply cancel and call it a loss.

Jermaine 'Skimpii Boss' Mason of HD Entertainment, known for the events Tea Cup Breakfast Party in Clarendon and Skimpii Short Shorts and Bikini beach party in Portmore, said his team has lost out following the announcement of the SOE.

The group had plans to stage a Skimpii edition on Sunday, October 6, and although the scheduled date did not fall within the initial SOE's 14-day period, Mason said, "We were advised by an inspector to go ahead and cancel as there is a 95 per cent chance that the SOE is going to be extended as it has been done for others."

He continued: "Budgetary wise, we have already lost because we have put money into the promotion of the event and by starting to spend towards it, creating and printing flyers, plus going to events to spread the word, we have lost; it is better to lose little than big."

He says that the SOE, although sudden and unexpected, is welcomed by the team.

He said they weighed the options of moving the event elsewhere, "but to have a beach event, where our target audience would still be able to attend, is limited. Portmore has lots of beaches. The next places we could think of was Bull Bay and Ocho Rios and those are not feasible."

He admitted that although Portmore is considered a fairly quiet area, the municipality still has volatile communities.

"So the Government and law enforcers are doing what they can to have a better Jamaica ... it's just that the good suffer for the bad ... which is what is happening for most promoters," he said,

Another promoter, Omar 'DDP' Bell, who was planning to stage the silent headphone party Box Office early next month.

But "Like most Portmore residents, I am waiting it out to see if it will be lifted within the 14 days as mentioned," he said.

He and his team also considered changing the location, date and time of the event.

He said: "Maybe a Sunday would be the next best day. Originally, this, our second staging for 2019, was set for Saturday, October 5, in Portsmouth. But since the SOE, we anticipated moving it to the next day and keeping it earlier".

However, he noted that time of day does not match the usual concept of having a silent headphone party, and some supporters also work on Sunday mornings.

He noted that Kingston was an option as the time restriction related to the Noise Abatement Act, might not affect a silent party. But Bell insisted that there wasn't an audience 'in town' for Box Office.

"We'll see wah gwaan before taking the next step. That's why we haven't yet announced a postponement or cancellation. I really think it is necessary to create order but believe the government or whoever enforcing it can do better and be more accommodating so that business people should not have to suffer," he said.