Aidonia says cannabis fires him up 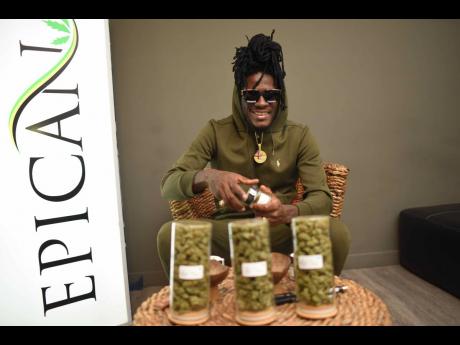 Dancehall artiste Aidonia says cannabis plays a major role in helping him to develop and deliver high-grade music to fans around the world.

"I always say the herbs bring words. It's a major part of the creative process for me. Helps me to wake up and be 'Didi don', maintain that personality and just deliver that fire," Aidonia said.

The artiste, who is the face of Epican, Jamaica's first cannabis dispensary, recently took the 'first draw' of Epican's new strains of weed. Aidonia, with team in tow, sampled specially prepared packages of the cannabis brand's Afghan Skunk, Gelato and Super Extra Skunk in the smoke room at Epican's Market Place retail store in Kingston.

The new strains, all predominantly Indica, are being phased into rotation to further bolster the variety of strains already available at the retail locations in Kingston and Montego Bay.

"The new strain dem hot man, but personally, my favourite from the three is the Gelato. The second would be the Super Skunk. Epican always has the best, grown under the best conditions, we know the story so we know what to expect," he said.