Security guard wants to make his name in dancehall 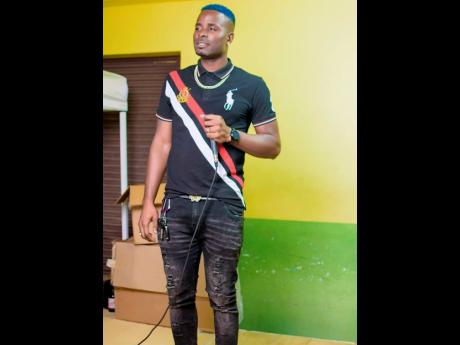 For up-and-coming dancehall artiste Grabba Dan, time management is a critical ingredient in actualising his dreams of stardom. The 29-year-old is a security officer with Hawkeye Jamaica but is on a mission to become one of Jamaica's brightest musical stars, which means finding innovative ways to pursue his passion while paying the bills.

"I would love to do music full-time, but I wouldn't want to just leave my job without having a hustle in order to feed my two kids in the meantime while I focus on music," he told THE STAR. "The security thing takes up most of my time 'cause I have to work for like 12 hours, so I try my best to put in the work, and I write music and rehearse it on my days off."

His singles include Perfect Girl and Di Choppa Dem Deh Ya, both at the opposite ends of the spectrum where themes are concerned but still showcasing his singjay signature. Interestingly, a quick Internet search yields different artistes who are currently using the moniker 'Grabba Dan', but the entertainer is sticking with the name.

"Most people call mi that and know mi by that name. As a matter of fact, the first single I put out, Piece of the Cake, was released under the name 'Grabba', which I once used. Then mi go on YouTube and realise there are a lot of people with that name, so I put the 'Dan' on it, only to realise people are also using that. So, to make it a bit different, I just added 'Ja' to the end so people can find me on social media," he said.

Primarily raised in Stony Hill, St Andrew, the artiste, whose given name is Fabion Bucknor, first explored his interest in music while attending St Mary's College, where he performed among peers. Upon completing school, he pursued security training at the Heart Trust/NTA and worked at Allied Protection Limited thereafter.

Citing Vybz Kartel as his biggest musical inspiration, Grabba Dan is now looking to break into the dancehall scene and create his own fan base.

"Kartel is my artiste. I listen to his music a lot, so I get ideas from his tracks and style. I'm not saying I copy everything he does, but he is my main inspiration, and I look up to him as a musician," he said. "My biggest challenge now is to get into dancehall itself. There is a lot of work that has to be put in, but my children keep me motivated, and I think I have something that people want to hear, something different," he said.