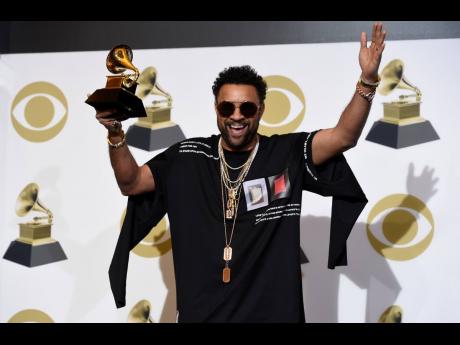 Shaggy with the award for best reggae album for ‘44/876’ at the 61st annual Grammy Awards at the Staples Center in Los Angeles in February.

Winning a Grammy is a dream of many recording artistes and their labels, but for several local acts, submitting an album during the pre-nomination period is not only about grabbing the title.

According to Julian Jones-Griffith, well-known artiste manager, it is about preserving the reggae category and also using the platform to promote the music.

He shared that he did not submit any albums this year, but urges other professionals, once their album is eligible for the Grammy season, to not be left out of the running.

"It is crucial that every artiste and/or label in our dancehall-reggae community that releases an album, submits it for consideration so that the Grammy Awards do not drop the reggae category," Jones-Griffith told THE STAR. "I believe the number of album submissions dropped below the average one year, from the usual 100 to 120 albums submitted to the 60s, which resulted in the governing bodies considering to remove the category altogether. In order for us to be taken seriously as a genre in every platform, we need to have a strong presence everywhere."

The first round of voting, which is only open to members of the Recording Academy, commenced on Wednesday, September 25, and is expected to end this Thursday.

This will determine who will be celebrating on November 20, when nominations for the 62nd annual Grammy Awards will be announced in all 84 categories, honouring the best in recordings released between October 1, 2018 and August 31 of this year.

"Even though roughly half or more of those are rhythm complications it is important for us to keep making albums and keep submitting them," he said.

Producer Dale Virgo said it is not too late to contribute to the survival of reggae and its child, dancehall.

"The process of registering to be a member that can vote is a long one and there are many requirements and recommendations that have to be made, but it is worth it," Virgo said.

He submitted Deal Wid It, the debut album for Kim Nain.

She expressed, "For me, technically considered a newcomer in the business, I was not thinking to submit my debut album for something as big as a Grammy but it is not about being fit for the pre-nomination season. It was more of a 'why not submit it?' thought. I don't know a lot of eligible voting members so when he called to tell me it was on the list, I thought it was a prank but he believes it has potential to be a breakout if nominated."

Every year, according to Jennifer Valentin, publicity manager of VP Music Group, the record label submits all of its eligible new releases for Grammy consideration.

"Our first round offerings generally total more than 30 separate releases across multiple categories. We support the titles with varying levels of marketing during the voting periods as we do during the rest of the year," Valentin said.

She said that VP Records and its affiliated artistes have received 24 nominations since 1999 and one win with dancehall artiste Sean Paul's Dutty Rock in 2005.

The label also shared that Christopher Martin's And Then, Beres Hammond's Never Ending and Jah Cure's Royal Soldier are currently in the race for nominations.

Other artistes that are on track include Sizzla's Victory, Jahmiel's Great Man, Lutan Fyah's Longest Livah and Third World's More Work To Be Done.

The final round of voting takes place from December 9 to January 3.