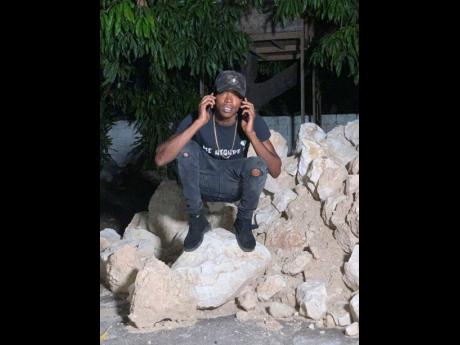 The artiste insisted that though the song promotes having lots of money, is in no way urging persons to obtain it illegally.

"The term 'brik pan brik' represents stacks of money, so I don't want anyone to get this twisted. I have a wide variety of music and I personally don't promote scamming, only artistry in my music.' Skillibeng told THE WEEKEND STAR in a recent interview.

Skillibeng, 22, who is from Lysson Retreat, St Thomas, said he's motivating the youths of the inner city to hustle hard and strive for success. "My community is very elated about the happenings (with my breakout song) because Eastsyde is not just a record label, it's also a movement.. Everybody knows that St Thomas is an eastern parish, so I am Eastsyde and I represent them fully," he said.

A section of the song may raise eyebrows, as there is a narration in the background of scammers creating havoc on unsuspecting victims. He said the clip doesn't represent the main idea of the song, which is to make money, and is just there to play on the minds of listeners.

"This song has already started impacting my career positively, it's being played on radio stations everywhere locally, and this has made me even more confident," he said.

He added: "The song was initially an Eastsyde project, but all credits to Claims Records who decided on a partnership basis - Claimsx Eastsyde. That partnership led to the song making a huge impact."

He paid homage to Vybz Kartel, stating that the Gaza Boss' success motivates him to keep pushing. "I am my biggest inspiration, as long as I'm mastering my craft and building new sounds, flows, lyrics and improving my performance, then I have done my best; and I know I will be helping to shape the new era of dancehall music."