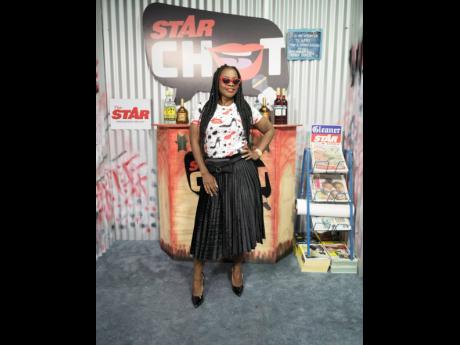 When Pamputtae released her first reggae record titled Stop It in 2017, she had opened up about her own struggles with an abusive partner. At the time, there was an increase in the number of domestic violence cases and the entertainer wanted to use her music to address the issue.

The song may be two years old but a recent incident has prompted Pamputtae to resurrect the track and she will once again be pumping heavy promotion behind it.

In an interview with THE STAR, the Single Mother singer recalled a murder which occurred in her Fletcher's Land community earlier this week.

Twenty-three-year-old Dyema Balfour was allegedly stabbed to death by her 63-year-old ex-lover. She leaves behind her month-old baby boy. Pamputtae, who hails from Fletcher's Land said she knows both the victim and the alleged perpetrator (who is now on the run).

She says the incident has made her extremely sad and she just wants to once more shed light on the issue of domestic violence.

"It make me feel a way and me just cut up over the whole situation. This man is a big man weh older than the girl mother and she dead left her baby, him not even reach one month and she dead left her child, it real sad," she said. "The whole Fletcher's Land tense now because of that incident. Everybody sad."

"A dem things yah make me sing the song. Man fi stop kill woman, it nuh right. Seeing them and knowing the situation and everything really make the song relevant again. Me really wah push it some more now. Me wah talk to the man dem and the young girls and some a dem parents yah, too," she continued.

As part of the promotion for the track, going forward, Pamputtae is planning on releasing a music video. She says she will be putting her all into the visuals because she wants the message to come across in such a way that it touches people.

"I can't say when the video will be out just yet, but it's coming very soon. This is a message that really needs to get out there in a real way," she said.