Voicemail not giving up on goals - Nearly a decade after member’s death, surviving duo says brand has expanded 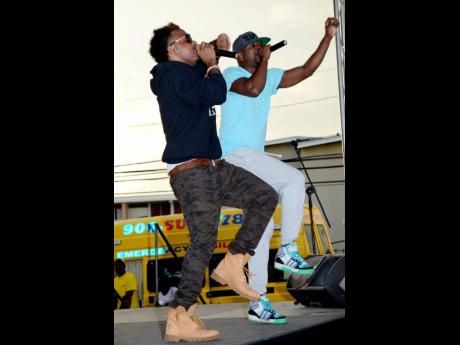 The legacy of dancehall duo Voicemail - and their late member Oneil Edwards - still lives on in the pulsating beats of tracks like Ready To Party and Just Dance.

The goal was to be a successful, internationally recognised dancehall staple, said Kevin 'Kevyn V' Blair.

"When we set out into the music industry, it was with typically the same goals, and we had certain achievements like the Grammy Awards to aspire to and I think we are still on that venture - in a sense we are still fulfilling some of these things," he told THE WEEKEND STAR.

Kevyn V, along with Craig 'Qraig' Jackson, make up Voicemail. Both have expressed wanting to satisfy the demand for more music from the brand, and in expanding their own brands with solo projects, feel they have done well.

Kevyn V admitted: "There was a bit of slowing down that was done a while after Oneil passed, but it was natural."

Over the past year, Voicemail has added tracks such as Language and Independent Girl. Qraig also hits hard with Goodie Come Out and Skinny Jeans and Clarks. Kevyn V has also released the single Your Love.

"What it shows is that the brand Voicemail has evolved with music as a duo, and individually, that strengthen the brand," Kevyn V said. "Through a podcast called Premiere Thursdays we created, we have also managed to launch a platform to promote our music and with the interest from the public and request from other entertainers to feature their songs, it is now going further than expected."

The duo, which is currently planning a European tour, admitted that Edward's absence is still a "heavy weight".

"I know he would be proud to know that the Voicemail banner is still being waved. The one thing he would say after a show is "mad" and I can hear him saying that to this day. Kevyn and I are excited and we know he's excited for what is coming," Qraig said.

Qraig said that Voicemail's progression comes at a time when dancehall is experiencing its own evolution.

"Dancehall dance culture has grown to full blown choreography being represented in music videos on the international platform and people are also coming here to be part of that," he said. "I am in love with where it is and what I am observing in the dancehall and we can only continue to grow with it."