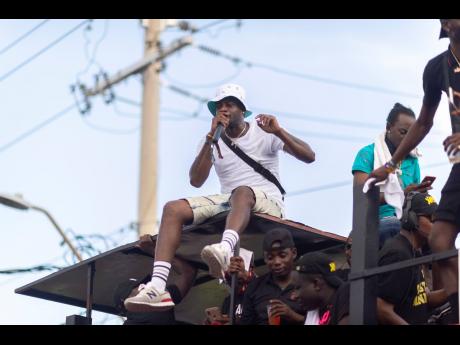 Dancehall artiste Ding Dong has described the soca world as territorial, arguing that this is the reason dancehall songs on soca rhythms have never become hits.

Ding Dong, who released Run Up and Down, a soca collaboration with Mr Killa last month, said that he hopes the collab will be accepted by fans of the genre, adding that he is not doing soca to try and take over.

Like the lyrics of Run Up and Down states, "I ain't no thief, I ain't no robber. I'm here to whine on girls, I'm just a party shella," Ding Dong said, "If I do soca, I want it to have a real authentic sound of the genre. It's the same thing I did for the afrobeat track Lebeh Lebeh. I did not just want to be deejaying on a rhythm that's also the reason I collaborated with Mr Killa to get it close to authentic to get it through the gates."

Local fans last week smiled at news that Ding Dong placed third in Trinidad and Tobago's 2020 Groovy Soca Monarch. The problem, however, was that it was not the Ravers Clavers top man.

"That is a selector who plays for Bunji Garlin. He does production and lots of people thought because they heard Ding Dong it was me," the Jamaican said of the actual third-place finisher Viking Ding Dong.

"I am good friends with Bunji Garlin and so Viking Ding Dong and I interact, talk very well too. There is no animosity, but when we buck up each other we always make fun and say things like 'my youth why you haffi give yourself me name', but is a cool person," said Ding Dong.

Over the past 10 years, the Nannyville, St Andrew - raised entertainer has collaborated on several soca songs with carnival big-timers like Machel Montano for Drive in 2010 (also featuring QQ) and Live Good with Garlin in 2018.

He is, however, yet to reach the commanding heights when it comes to soca, and Ding Dong has a theory.

"The soca world is (made up of) territorial people like dancehall. We (are) going defend our authentic music. There have been many dancehall artistes deejaying on a soca rhythm but it never hit," he said. "Likewise you have soca songs played in dancehall, but is like having one foot in ... but I say stay true to believing 'we are one Caribbean'."