Kevin2wokrayzee is ready for the big screen 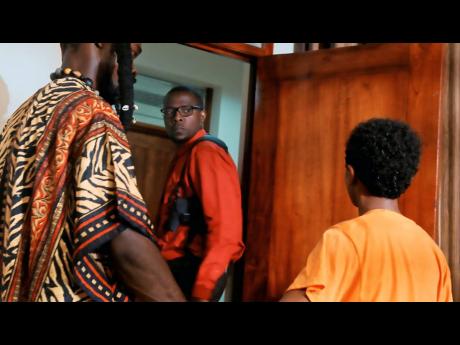 Contributed Sgt Miles (centre), played by YouTuber Kevin Swaby, takes a second glance at Pressure T (left, played by Delroy Johnson) and Miguel (Emmanuel Nunes-Chavez) in a scene from ‘Your Day Is Tomorrow’.

Better known by his YouTube and social media handle Kevin2wokrayzee (Kevin too crazy), fans can finally see Kevin Swaby shed his comedic persona for a serious one in a brand new short film called ' Your Day Is Tomorrow'.

Centring on Miguel, a homeless boy who can see murders before they happen, the film features police officers, extortionists, and corrupt officials. Swaby plays Sergeant Miles.

Your Day Is Tomorrow was released on YouTube last Sunday. Forty-eight hours later, the film counted more than 11,000 views.

Popular for his comedy-commentary videos on YouTube, Swaby told THE WEEKEND STAR that playing a serious role was a refreshing change.

"Everybody know you for comedy and 'laughy-laughy', so when it comes to taking on something outside of what people expect of you, I always welcome that. It was a great thing for me," he said.

He explained that his performances have always been more expansive than what the public sees. Being an actor wasn't an initial aspiration for Swaby. But taking theatre arts in grade 10 ignited a spark.

"It was something that I loved. It was one of those classes, you escaped from the norm of being inside of a classroom, writing all these extra notes. I mean, you take notes, but it was a more practical thing than theory," he said.

As much as he enjoyed the class, "bad luck caused him to fail" the exam.

"If me did follow what the grades say, I would have thrown this aside. But what they said happened, it was just some mix-up of grades and I should have queried it. But I didn't bodda go back go query nuttin. I left it alone, because I think I understood where my potential was. I never let that deter me," he said.

For Swaby, it was fulfilling to see Your Day Is Tomorrow come together despite the hiccups. He and the crew are also happy with the public's response to the film so far.

"I am glad that people are accepting it, because I've heard them say we tired of the same old badman, guns, drugs. To see that they are responding to it in this way shows that they really are looking for a change, and they are very appreciative of this type of film. Hopefully other film-makers see it and start going out of the box. You nuh haffi guh di normal route. We can definitely do other things. We don't want to be locked in the box of just comedy. We want people to take us seriously as actors," he said.