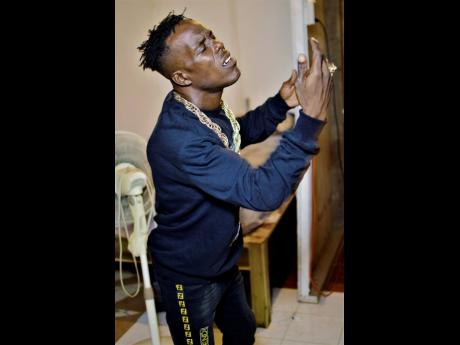 His name may cause some laughter, but Concrete Face has survived decades in the music industry. The 45-year-old artiste, whose given name is Delroy Elliott, has done work for the likes of dancehall legend Super Cat and Merciless.

Concrete Face said that he developed a love for music at a tender age, and at nine years old he ran away from home to pursue his dream of being an artiste.

"While on the streets, I went by my stage name Little Don, and some people took me to Ninja Man, who changed my name to Destruction. However, artistes like Tony Rebel, Garnet Silk, and dub poet and talk-show host Mutabaruka say they don't want any destruction in the music business and called me Instruction. My name was later changed to Concrete Face by veteran selector Fire Links," Concrete Face said.

An involuntary returned resident, Concrete Face has documented his experience in a song, titled Deportee, which is a OneStaroutdeh production.

"I'm the only deportee that used $80 and start life. I used the money to buy bag water, and sell it on the streets. I then buy a bucket to sell my goods, later I bought an Igloo; so step by step, I'm getting there one day at a time," he said.