Gold Up Music releases Konshen’s ‘Let Her Out’ 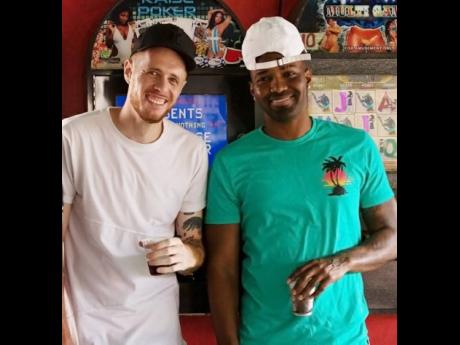 Raph (left) of Gold Up Music lymes with Konshens.

With the release of its debut album, Prelude, and more recently the latest single Kimberly, featuring Shatta Wale and Captan, Gold Up Music is back at it again.

This time around, the label, based in Montreal, Canada, and Kingston, Jamaica, has collaborated with one of Jamaica's most iconic dancehall artistes, Konshens, for the release of Let Her Out.

Gold Up Music is led by its founder Raph, and popular dancehall composer Zack Ariyah.

"It's a track that all the ladies love. As usual, Konshens delivered, and I know this track will be well received," said Ariyah.

Let Her Out was co-produced by Ride Di Vibes and released on June 19.

"The song tells a story of a man who stifles his woman's individuality, making her feel trapped, leading her to explore a more exciting side of life. The artiste playfully brings awareness to the fact that men need to allow women to maintain their individuality within a relationship," said Raph.

The international record label made its debut in June 2018 with the release of the single Belong With Me, featuring Jamaica's international sensation, Shenseea, which currently has more than two million views on YouTube.

Raph and Ariyah quickly found their groove and started releasing more heavy-hitting tracks, such as Iba Mahr's Concentrate and Shatta Wale's Be Afraid.

Throughout 2019, they landed opportunities to collaborate with many talented artistes from Canada, Jamaica, Trinidad and Ghana, among other countries.

"We are grateful for each artiste whom we had the opportunity to work with. We are always working, and 2020 is still a part of the plan," said Raph.