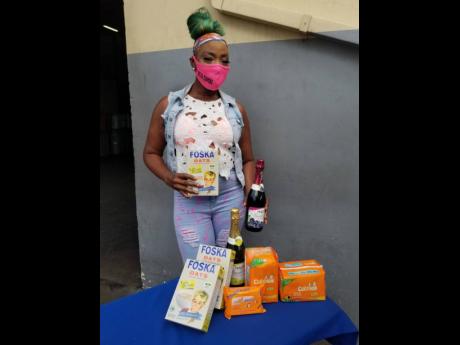 Macka Diamond showing some of the items provided for the expecting mothers.

They say when it comes to motherhood, all love begins and ends there.

With the recent tragic event surrounding the untimely passing of mother Jodian Fearon, local recording artiste Macka Diamond was inspired to assist pregnant mothers who are experiencing difficulties in preparing and coping for the next stage of their lives.

She launched an online charity to assist her efforts. Macka Diamond, given name Charmaine Munroe, explained that she has always been a giving person, helping out others in any way she could.

But Fearon's circumstances brought up painful memories for the entertainer who struggled while she was pregnant, specifically during labour.

"When I went to have my baby, I almost died and my child almost died too. I didn't know which one was going to happen but we were both at risk and I was having a rough time," she said.

To add insult to injury, she was going through strife with her babyfather and she recalled someone coming to help her through her pregnancy.

"It's good to give back knowing that I got a lot of help from people during my days leading up to becoming a mother and after as well," she added.

When she launched the charity on Mother's Day, she offered pregnant mothers who needed certain items that were essential to carry to hospital in preparation for giving birth, as well as stuff for the newborns.

It started out of pocket for the Caution singer, but her humanitarianism didn't go unnoticed. Persons and companies saw what she was doing and reached out to help.

The journey has presented its own hurdles. Getting to some of these mothers has proven difficult, considering they live far and they're pregnant. But Macka Diamond finds a way to meet them nonetheless.

Admitting that some of the stories have been heartbreaking, she remains motivated.

She is in the process of staging a charity concert this Sunday, via her social media platform, with other artistes including Alaine and I-Octane. All proceeds from the concert will be going towards the charity.