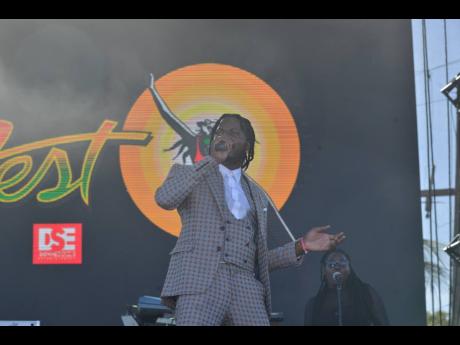 The line popularised by dancehall artiste Govana through his latest single, Likkle Bit A Money, is being used to silence people who feel the need to speak ill of others, especially when their way of life deems them unfit to offer up opinions.

Govana told THE WEEKEND STAR that although he could not have predicted the line would gain so much popularity, he's glad it did because the message he intended to portray will connect.

"This idea came from just being in the dancehall scene every night and seeing people who woulda be classified as billionaires or multibillionaires, how they would operate in a less boastful manner versus a man who make a quick buck. The billionaires dem always inna corner wid a one Champagne and thing a behave like is nothing and so the song is a vibe where we a say 'Yow bro yuh hyping wid nothing really and truly'," he said.

"Mi think the people dem get the message behind the slang cuz me see dem a use it up fi hush people when dem a talk things weh dem nuffi talk or a hype over things weh dem nuffi hype ova". Likkle Bit A Money was released on July 3 and is nearing the million-views mark on YouTube.

Govana says the people are always at the forefront of his mind when going through the creative process.

"I stay true to the streets and I guess that's why Govana keep connecting . I put myself among the people and not above them so I always know what the people will relate to because I can relate to it," he said.

Govana also explained that his musical connection remains pure because he steers clear of negativity and controversy.

"Mi nuh like mix-up and drama. Mi nuh believe inna dem thing deh. Mi nuh like the bagga chatting and dancehall is like one big drama class. Di man dem move like some big sketel and mi forward inna music, mi never forward a no drama class so mi just stay inna my lane and do my thing," he explained. "Mi just wah do mi music and support mi family, mi nuh really have no time fi nothing else honestly speaking. Mi mind set pan mi goals and mi have on mi blinds. The love of my fans, my family, my friends keep me fuelled."