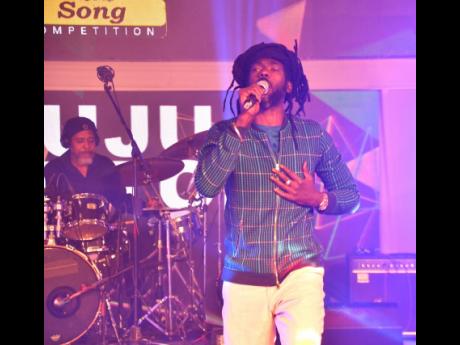 'Festival Song competition winner 2020' is a title that will perhaps take some getting used to for reggae artiste Buju Banton, but that in no way diminishes the joy he feels at this victory.

His happiness is twofold. Buju says he is "happy about winning and being able to help the [Sunbeam] boys' home in a meaningful way, in addition to shining the spotlight on the festival song competition".

Buju and producer Donovan Germain, both festival song newbies, were motivated to enter by the culture minister, and while they wholeheartedly supported the mission of elevating the contest, the duo also had their eyes keenly on the prize.

The winning song earned a total of J$3 million in cash prizes to be divided among the singer, writer and producer and they knew exactly what they were going to do with it.

Germain told THE STAR that Buju had visited the home and seen that the boys needed assistance. "We considered reaching out to one of the corporate companies to partner with us, but then the virus came along. And when the minister [Grange] motivated us to enter the competition, we saw this as an opportunity to get the funds for all the things that needed to be done for Sunbeam."

Social development coordinator at the home, Kay-Anna Jenkins, told THE STAR that the staff and boys are truly ecstatic. "We are blessed and appreciative of the fact that Buju Banton is dedicating all his hard-earned money from winning the contest to the home. And he even called our names on national television and it resounded all over the world," she said. "To be honest, I didn't even hear the full sentence, all I heard was 'Sunbeam' and I started screaming."

Luckily, the boys were able to watch and re-watch the finals several times during the course of Sunday night and Monday, so they heard exactly what Buju said.

Jenkins said that when the Grammy-winning reggae star visited the home this year, the boys were inspired.

"Buju told us that he was going to show us what he means, but he didn't go into details. We could never have imagined that this was it. Coming out of the COVID lockdown, this is so much joy and a much needed boost for the boys' spirit. Sunday night they were watching and cheering for Buju, so the fact that he won was enough, and then this. We are grateful," Jenkins said.

The year 2020 has been a great one for the Jamaica Festival Song Competition and for Buju. The contest has seen a revival that has only been dreamed of, while Buju released his first album in 10 years, Upside Down 2020, and recently received a gold record from the Recording Industry Association of America for his iconic album, Til Shiloh.