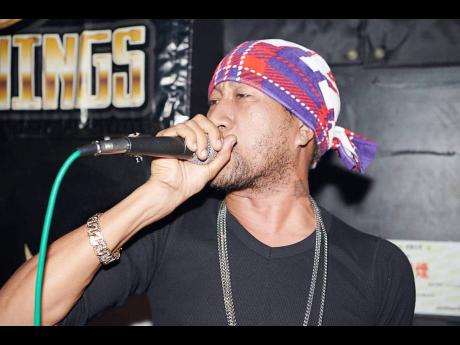 When Ricky General emerged on the scene in the early 1990s, his mission was to set the international stages on fire.

He did so with his single Sketell Bomb, which made it on reggae charts. Other singles like You A Lead, Wickedest Ride and the All Who No Like Informer collaboration with Mega Banton, garnered the attention of promoters in the US, Europe and Japan for the artistes to secure bookings on major stage shows.

However, in 2004, at his peak, he met in an accident while riding his bike in Portmore, St Catherine, which changed the trajectory of his musical career.

"I couldn't walk for more than a year. My left knee, shoulder and fingers did mash up. It required me to do immediate surgery and then a lot of physiotherapy after. I have to live with pain, and depend on medication for relief," Ricky General told THE STAR. "There was a tour in the US that had to be cancelled, and other performances in the Caribbean. It took me some time to heal."

Ricky General said the majority of his income is earned by recording dubplates and tours, the most recent being in 2018, alongside Mega Banton and Luciano.

He would have returned to the UK for the first time in 25 years in August 2019, but the concert was cancelled.

"I never stopped putting out music, but it was not as frequent. I am in the studio day in, day out. There are over 220 songs on a hard drive waiting to be released. Most of the focus was on the earlier tracks, so me gwaan do my songs from the '90s into the early 2000s, but me a return fresh pon dem," Ricky General said. "Back in the day, we nuh make nuh money, producer take everything. We all go Japan, only to see the people coming to us to sign an album that [was] released in '90s that we never know about, never collect an royalties. At least if we get a royalty cheque, God bless weh deh pon it. So we learn, and the youths learn from our experience, but everything straighten out now, and that's why I rather produce my own music. Even if it's on someone else's label, I co-produce with them."

With his career as a dancehall recording artiste and toaster spanning more than two decades, Ricky General believes he is ready to tackle the current dancehall scene.

"The business was always changing; the music was always evolving, even though people still love music from our generation because the energy is nothing like '90s dancehall. At the same time, it travel with time as the youths deh deh ah listen to we and turn it into something new. This [is] only telling we that sometimes you have to cross over to the younger generation's way of doing music," he said.

"I never released an official album, either, so I am working on my EP. A lot of people want me do songs that speak to 'badmanism' and have the old flow, but I am doing a variety, a little souls music, a little bit of every genre that the young people can appreciate, too," he said.