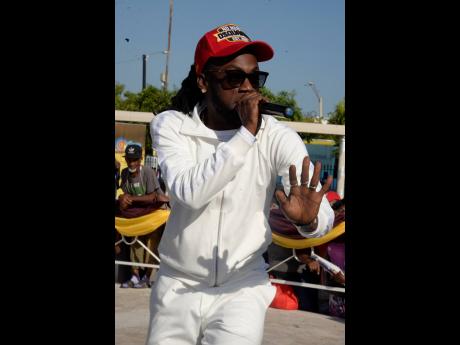 When UK-based dancehall artiste Stylo G first revealed to his Instagram followers that he had a stalker, many perhaps thought it was a publicity stunt.

The fact that the artiste then began promoting a new track titled Stalker did not help. But he told THE WEEKEND STAR that he is telling the truth about a very real situation.

"For the last three years this woman been on my case. I have never met this woman in my life, never ever, but she send me nudes (on social media) and I turned her down and she took it very personal and has been trolling, making fake pages non-stop. Over 500 fake pages," he said, also revealing that the cyber stalker has somehow obtained his phone number and home address.

"Right now I am living with my kids and at the moment I am very cautious and I have to be because she is sharing my personal information all over the Internet and so I am actually very worried and the entire situation just inspired me to do the song," he said. "This is my first experience with a stalker and when people get your address and phone number, I think it's time to put a stop to it and that's why I took it to social media to let people know this is a serious thing."

Stylo G said that he is not even sure if he would officially release the full track as another single, Oh Lawd, produced by Chimney Records, is still bubbling.

"People are saying it is one of the biggest songs on the riddim and so, honestly, I am focusing on that at the moment not the Stalker song. I did that just to try to scare her off and to make her know that 'Listen, I will show the world what you're going on with'. I just want it to stop," he said.

But Stylo G said that an official release is still not out of the question, considering that "people are going crazy for it".

"Females have experienced it with male stalkers but me as a man being stalked by a female, this one is kinda crazy and so people are reacting to it even more. It's a song that they love. They are pressuring me to drop this one so yuh never know," he said.