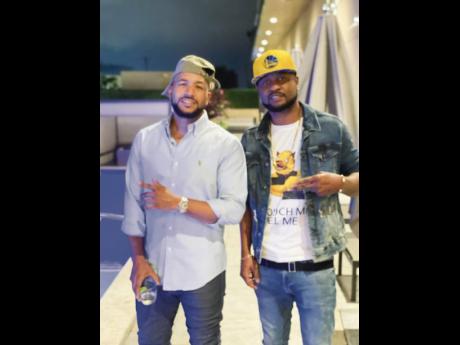 Serani (right) and friend and rapper Duke, who is featured on ‘Somewhere in Jamaica’.

As links continue to be made between violent lyrics and Jamaica's growing crime rate, singer Serani showcases the beauty of the island on his new single.

"I was always going to release the song Somewhere In Jamaica on February 5th but it is just so timely how it ties in with all that is happening in the country right now. This year, so far, we have 100 and odd people dead and that is so ridiculous when we have so much to live for," he told THE WEEKEND STAR. "We have an island that people cherish and one that is well known for its beauty, its food, the hospitality of its people, and we need to realise that. If we take the time out to really appreciate all that we have here as a country, perhaps we would be thinking about more ways to uplift and build rather than tear down."

The No Games singer referenced a statement made by Prime Minister Andrew Holness last week who expressed concern about the number of 'gun songs'.

"We need more songs pushing our culture and embracing positive energy so we can push tourism some more. Somewhere In Jamaica is very timely and I want it to be one of those songs that when people think about Jamaica they don't think about the crime, they'll think about all the wonderful things about our blessed island," Serani said.

The song's video was shot at various attractions across the island. Serani told THE WEEKEND STAR that he was inspired to write the track after taking several road trips with friends across Jamaica during the summer. He said despite the lockdowns and the COVID-19 restrictions, there are still many places that can be enjoyed.

"It's just crazy to know that you can live somewhere and still have so much to discover about the place. We Jamaicans don't appreciate Jamaica enough. It was just awesome to see how untainted the natural beauty of this place is. I hope when people listen to this song and watch the video, they realise just how much and may even open someone's eyes to why we need to live in peace and unity," he said.