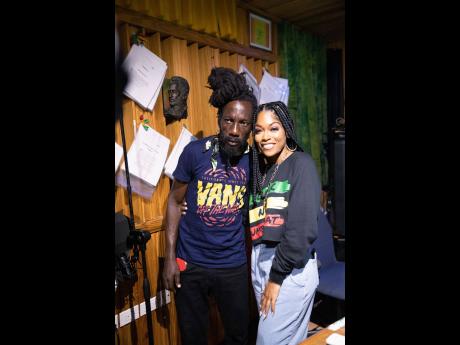 When Sizzla penned the lyrics to the song Give Me A Try, he pleaded with a love interest to give him a chance to prove that he was exactly what she needed.

Today, the still beloved track has been given a modern twist by singer Tosh Alexander, who felt that it was high time the love story be retold from a woman's perspective.

In an interview with THE STAR, the singer said she had been sitting on the project, Can't Give You A Try, for over a year, toying with the idea of taking it to Sizzla for his approval.

"I had the song and I was like he's not gonna hear it, that's far-fetched. It turned out that I met his son (Meleku) ... not even knowing that it was his son, to be honest, and when I was thinking of putting it out I said to him, 'tell me what you think' and when I played it him say 'yow this bad'. Then he said 'I want my father to hear it'," she recounted. Tosh Alexander admitted that she was fearful Sizzla might not like it, but Meleku was confident he would.

"He literally that day went home and played it for him, and Sizzla called me and say yow, him like the tune and he wanted to make a couple changes etc," she said.

Tosh Alexander said that she explained to Sizzla that since his song spoke on behalf of the men, it was time for her to speak for the women; he wholeheartedly agreed.

"And so he just blessed us. In the video yuh see him vibing to it and I was just in awe watching him enjoying my work because I am a Sizzla fan. Growing up my family would play Sizzla all the time and so to watch him in this space enjoying my tune, I was overwhelmed," she said.

Pointing out that the refix was inspired by personal events, Tosh Alexander says the reaction so far has been mind-blowing.

"It was not intended to even be a single. Like, it was just something I was doing for me," she said. "Honestly, it's been getting such great feedback. Men are telling me that it is dope how I flipped it but the women have been messaging me non-stop saying 'this is on point'."