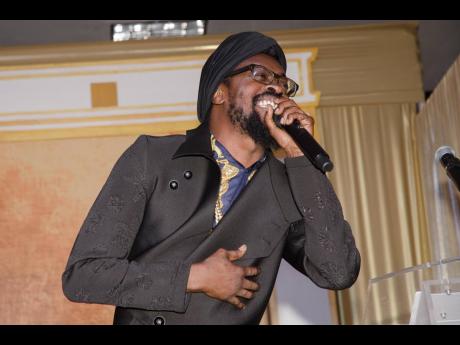 Dancehall artiste Beenie Man has been keeping himself busy in between completing the work on his album Simma, and 'staying close' to his mother, although she was laid to rest last October.

"Mi madda is my best fren, enuh, like seriously, that's why me down a St Elizabeth so regular [of late]. She nuh deh a town nuh more, she bury down deh so I go talk to my mother," he told THE STAR who joined a welcoming party for the Grammy Award-winning entertainer hosted on the popular audio-based social networking app Clubhouse.

Instead of a traditional burial site, Beenie Man had a two-storey house built in Shrewsbury, the birthplace of his mother Lilieth Sewell, who passed away in September, while recovering from a series of strokes. The room where her remains are housed is outfitted with two red sofas, a large personalised photograph of her, proper lighting and a ceiling fan.

"Me nuh know if you love your madda like how me love mine, but if you do, you will understand," he said. The most recent graveside conversation the Who Am I entertainer had was about his album production and a single he has released.

"This was last week Sunday and I just wanted her to know what I was doing, mi just want she bless me and mek it happen," he said. "I got up on Sunday morning around six o'clock because she usually would wake up from five, so me have to check in with her when me get up."

Fun in the Sun is the first single off the Simma album. It is dedicated to Sewell, and was played during the Clubhouse session.

He said the dedication "is not so much the lyrics or lines, is which part me write the song ... which was by mi madda grave. That's where the idea came to me, right at the graveside."

"With this song, we are trying to unify or bring more unity to dancehall," Beenie Man continued, adding that this was one of the many teachings he attributes to his mother.

The single is a collaboration with dancehall stars Popcaan and Dre Island, but Beenie Man said it was not initially written with them in mind, the collaboration developed from the entertainers getting together. The music video features the three hitmakers interacting at the Chinese Garden at the Hope Royal Botanical Gardens in St Andrew, along with additional footage of Jamaica's landscape. It is currently trending in the top 10 on YouTube.

Simma has been in production from January 2020 and the credits include songs with Busy Signal, Bunji Garlin, Shenseea, Hood Celebrityy, Shaggy, Sean Paul, Anthony Red Rose and Bounty Killer.

"It's a lot more collaborations; nobody nuh have anything to do, everybody deh a Jamaica so we link up in the studio a mek songs. Artiste can sit back in them studio, and me can go check a Shaggy or go Sean Paul studio fi check him. Otherwise, they would be on tour or me woulda deh pon tour," he said.