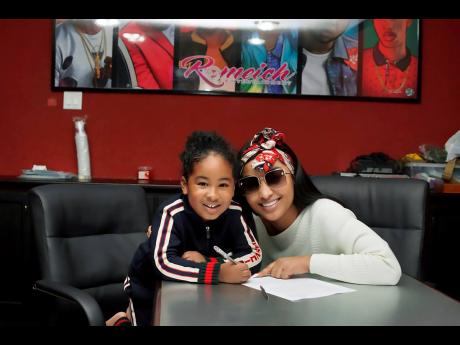 Throughout her career, Shenseea has added titles to her resume, including social media influencer, brand ambassador, and entrepreneur.

However, the recording artiste says one of her main jobs is being a mother. Speaking against the background of International Women's Day being celebrated yesterday, the Blessed singjay told THE STAR that her son, Rajeiro, is at the age where all the lessons about showing respect, especially where women are concerned, are fundamental to him becoming a respectable man.

"I will hear Raj talking about women, saying, 'This girl is so pretty', and in many instances, it will be female of mixed race or a Caucasian, and I make sure to show him images of black women to question him about what he sees as beautiful. But it's not about complexion. My thing is beauty starts from within," Shenseea said. "I want him to know all women are beautiful. I want him to be honest and humane, and it's not a hard task for me because I was grown in a home that taught respect. He will look at me and say things like, 'Mommy, you're so beautiful,' and that's what I want him to do, make women feel special."

She said her aunt is the one who takes charge of instilling values and helps her with educating him about manners and what it means to be beautiful.

"A lot of people may say that I am beautiful, but it's important to me that they know it's not how I look on the outside but on the inside. I am attracted to people's personalities, and sometimes on the inside they are the worst, the exterior is a facade," she said.

Her advice to women is to "be the best version of yourself". Shenseea says she does not mind being called an inspiration, but that she hopes women don't try to be like her. She has maintained her individuality in a fast-growing female dancehall community, but believes each person contributes something special.

Speaking about the current crop of female entertainers, she said, "I think all of them need to be given the recognition, all of them contributed to dancehall in some way. Really and truly, back in the day, people always tried to put females against each other. So as an entertainer coming into the field, you might be forced to think Lady Saw is the one that did this or Ce'Cile and Spice are the ones that did that. I big them up on a different level because if it weren't for them, I wouldn't be here right now."