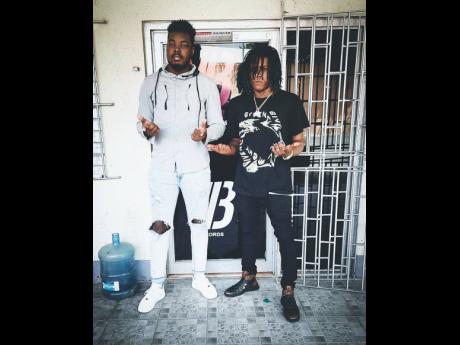 Dancehall artistes Gage and Devin Di Dakta have released the single Eye For An Eye that zooms in on reprisal killings and the role they play in the country's growing crime rate.

In focusing on the 'eye for an eye mentality', they are hoping that the track can act as a deterrent to persons contemplating revenge.

"I don't do a lot of collabs because I don't feel like there are a lot of people who write like me or appreciate my style of reasoning and when I check Gage music, he was doing the same things I was in terms of how he approached music. Mi link him up and a dis was the outcome," said Devin Di Dakta, adding that there are a number of individuals who get into a life of crime to avenge their loved ones. He told THE WEEKEND STAR that so far, the track has been positively impacting people.

"Mi get a message from a yute weh say him friend a have these thoughts because him wah take revenge fi him father weh dem kill. Di man say is like God and the devil inna him friend brain right now and a di song a pull him through," he revealed. "When I write a song, if me get a million streams dat nuh really matter to me, what matters is the impact. Mi feel more accomplished when me actually a change a life. That is why me really do dis."

Gage added that they wanted to show people that there are various ways to deal with situations, and at the end of the day, it's better to let some things slide.

"If yuh follow the revenge cycle is like a cartwheel weh nah go stop, it just ago continue. Yuh might get yuh revenge but nothing nuh stay inna di dark fi long and revenge might come back at you. It's a battle yuh nuh wah start," he said, adding that he has only seen good responses to the song so far. "We want it fi reach people and it a do dat so we give thanks," he said.