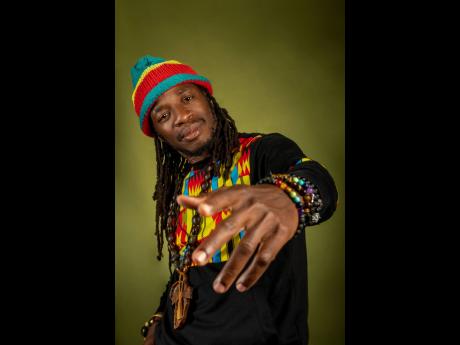 Reggae-dancehall artiste Lawgiver the Kingson is feeling pumped up about the early feedback to his album, Kingson from Kingston, which was released earlier this year.

"This album is the essence of good vibes, love, and African spirituality ... the feedback to the album has been great," he said.

The artiste has, however, been getting some flak from dancehall fans who say the title of his album is a little too close to that of the album from Bounty Killer, King of Kingston.

"I am the King's son. Bounty Killer is my general, but the idea for my album came from the fact that I am born July 23rd, which is the same date as H.I.M Haile Selassie and I was born in Kingston, and I see it as a way to say I am the King's son from Kingston. This is a title I have been using since 2007," he explained.

Lawgiver the Kingson said that Bounty Killer played an instrumental role in his development as an artiste, as the veteran produced one of his early tracks in 1997.

"I even 'bigged' him up on Instagram and he replied and 'bigged' me up, too. Big respect to the Killer, he helped me to perfect my craft in the early days," he said.

In the meantime, Lawgiver the Kingson is encouraged by the support of local disc jockeys for his project which is a delightful mix of Afrobeats, Afro-Dancehall and roots reggae. The project features seven tracks, all co-penned by him under his Imperishable Uprising label, and features musicians which reads like a who's who of Jamaican reggae music.

"Two songs, Alive and Kicking and Vibe, are both playing on Hot 97 and BBC 1xtra, and the songs are creating a vibe in Ghana, Nigeria and The Gambia. In Nigeria, they like the dubwise track, Hustler ... different places love different songs," he said.