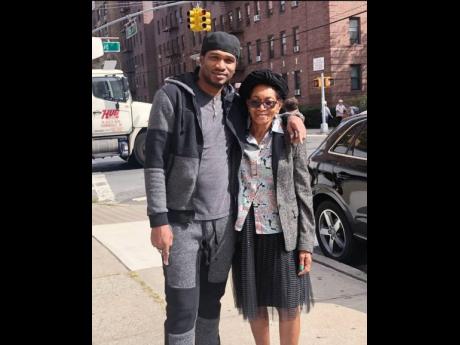 Dancehall artiste Mr Peppa, the brother of Steely from Steely and Clevie fame, is mourning the loss of his mother, Alice Johnson, who was one of the first female singers in the Twelve Tribes of Israel. Johnson, who was 74, passed away last Wednesday at the Kingston Public Hospital.

"My mom took sick in March of this year and visited the doctor. By the time the tests were completed in April, she was diagnosed with end stage renal failure and cervical cancer. She was on dialysis twice per week because her kidneys failed. Then there was a heart valve situation. She died last Wednesday from cardiac arrest," a sorrowful Mr Peppa told THE STAR.

The Hypocrite a Talk singer, who was the ninth of Johnson's 11 children, shared a particularly tight bond with her.

"Yeah, man, me and my mom did close. We grow up with mom and dad together. I remember as kids as soon as my dad left to work, we would run into their room and jump up in the bed beside her. I would take one cheek and my brother would take the other, because my mom's skin always felt good. We have this thing we called 'love' and whenever she was leaving, we would ask for some 'love'," he reminisced. "All of us as kids were rallying around her and there was some support from the Twelve Tribes, but a lot of the people in the organisation didn't know."

Mr Peppa said that his mother was a member of the group, Dan Hutson and The Seers, with whom she toured regularly, while also being an executive of the Twelve Tribes.

"All of my early life, mom was touring and doing Twelve Tribes work. In the organisation, she was called Sis Zebulon the First, but her friends called her Nanny. My mom toured Africa three times and Europe countless times. She also did a tour of the Caribbean with Steely and Clevie. Steely was her first child," Mr Peppa explained, in between pauses.

He praised his mother for his own talent and supporting him 100 per cent, and his late brother, Steely, for giving him the moniker, Mr Peppa.

"My mother was exceptional, she was talented, she played a pioneering role in Twelve Tribes and most of all, she was a great mother and she will be missed by all," the artiste said in tribute. The family is making preparations for a send-off for Johnson.