Sus Boss gets ready to serve up new music 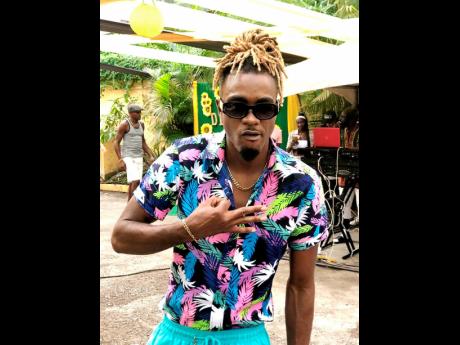 Dancehall deejay Sus Boss was about to go full swing in promotion mode for the Chi Chi Ching collaboration, Cologne King, last February, but then the pandemic hit.

The song, produced by D'Musical Antidotes, has still been well-received by fans, according to the deejay who is now gearing up to release new music.

"I have a song called Clean Everyday that's gonna be on a juggling rhythm produced by D'Musical Antidotes," Sus Boss told THE WEEKEND STAR.

"Mi mek couple a mi friends hear it and it's crazy, dem cya wait fi mi release it so we just a wait on the producer fi set the release date for the project."

He's also recorded several songs through the pandemic which he intends to release as an EP through his soon-to-be established label.

"Yuh know how music go nowadays, yuh haffi do your thing yourself in order fi get the benefits yuh really fi get," he said.

"People can look out for some street bangers and only positive songs, cause mi nuh do gun songs or scamming songs. We haffi try to protect we future generations and remember kids live what they learn. I'm a father of two and me and mi son dem medz, so when mi a drive inna mi car and a play mi music, dem will listen and seh dem like this or dem don't like this."

Sus Boss, whose given name is Greg Pusey, has had wide-ranging experiences in the entertainment industry. He attended the then named HEART Trust/NTA where he pursued hospitality and tourism, but got into modelling while working at Studio 38, located at Pulse Centre in New Kingston. Sus Boss is also known as a party promoter for Suspension Family and made his music debut in 2016 with Look, followed by Dem A Look, featuring Chi Ching Ching.

His music ventures aside, he also works as a waiter at wine and cheese eatery, Uncorked.

"Real Jamaicans hustle and we never yet try fi keep we hand in one basket so mi always working," he said.