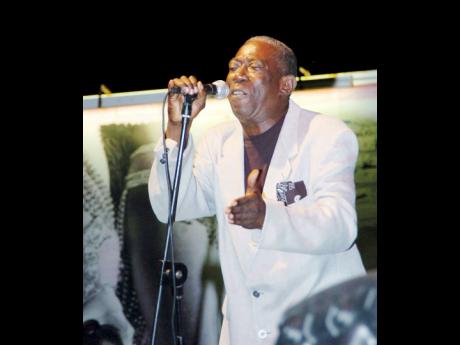 A GoFundMe account which was started four days ago to assist with the funeral expenses for veteran reggae singer Ernest Wilson has, up to press time yesterday, raised Can$220 of the Can$25,000 (approximately J$3.1 million) goal.

Wilson's son, Michael, who is based in Scarborough, Ontario, is organising this fundraiser.

Part of the appeal reads "We are asking the musical communities that my father has given beautiful songs and melodies to assist us at this time. We are experiencing financial difficulties to give him the funeral he deserves," the appeal said. Wilson told THE STAR that he was advised to seek help via the fundraising platform.

"I am not used to asking for help and so this is like pulling teeth. I am getting help from some individuals, but I want to be prepared and do the right thing by Ernest. I haven't even checked the account, so I don't know how much has been raised so far," he said.

Ernest Wilson, a founding member of the group The Clarendonians, would have celebrated his 70th birthday on November 18 and his son has plans to go to Hayes in Clarendon, where the singer was born, to do a celebration there.

"His friends who are entertainers could come down and celebrate one last time," he said. A nine-night will be held on Thursday at John T's place, Forever Young, in downtown Kingston and a date has tentatively been set for the burial.

"We are looking on the 30th of this month because the longer I keep [the body] the more costly it will be. As soon as we do all the calculations and have enough to cover expenses from donations and other things, then I will lock off the GoFundMe whether it reaches the goal or not," Wilson said.

In 1965, an 11-year-old Ernest Wilson and his teenage friend Peter Austin, formed the ska and rocksteady group The Clarendonians. Their hits included Rudie Gone a Jail, You Can't Be Happy and You Can't Keep a Good Man Down. The Clarendonians brought a seven-year-old Freddie McGregor to the attention of legendary producer Clement 'Sir Coxsone' Dodd and although he was never a member of the Clarendonians, McGregor recorded with Wilson as Freddie & Fitzie.

After the Clarendonians dissolved, Ernest Wilson enjoyed a solo career.