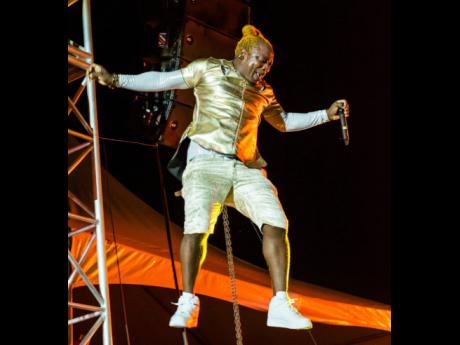 Elephant Man is not opposed to doing trap dancehall or newer genres, but right now, it’s old-school dancehall for him.

The ‘energy god’ recently released a music video for his song The Prettiness Fi Me, which samples Steelie and Clevie’s 1991 Giggy rhythm. He teamed up with producer Cassette Jones for the single.

“It’s December and the place a tek time open back, so we did want to bring back a little old-school vibe with the Giggy rhythm,” Elephant Man told THE STAR. “I hope it keep the energy of the dancehall, show dem weh we dancehall coming from and what dancehall is about, and bring back that party vibes to the dancehall with the drum and bass.”

The Giggy rhythm featured songs like Simpleton’s Coca Cola Shape and was sampled by former duo Leftside and Esco in 2005. That production, dubbed Throwback Giggy, featured two tracks from Elephant Man, including the song Play Hard Fi Get. He said revisiting the rhythm was a no-brainer as it stands as dancehall classic.

“When you go to a party and hear the rhythm, you know this is a sure banger; and this is one of the rhythms weh stand up in our dancehall culture,” he said. “When you hear dah rhythm deh everybody get mad, so that’s the idea of bringing back dah vibes deh and show dem seh we nuh forget we roots and we keep on doing dancehall, although some seh trap music, but we still a show dem seh dancehall all the way.”

But The Prettiness Fi Me also has a modern twist. Throughout the lyrics, Elephant Man plays on the current popular phrase ending with ‘for me’.

“We are all on social media and you see what’s trending,” he said. “The girls dem a talk ‘bout ‘a the stand up for me’ and ‘a di hairstyle for me’, so we kinda just mek the best of both worlds meet up. When a new slang come ‘round, you know Elephant Man always try endorse it because a our culture that, Jamaica run slangs. Plus, you know seh me have my own popular slangs, like ‘shizzle’ and ‘good to go’. So it was right in front of my eyes, and I said I’m gonna write a song about this.”

He was further motivated to write a song for women because “everybody a deejay about dem gun, and dem dis and dem dat. The girls need this anthem.”