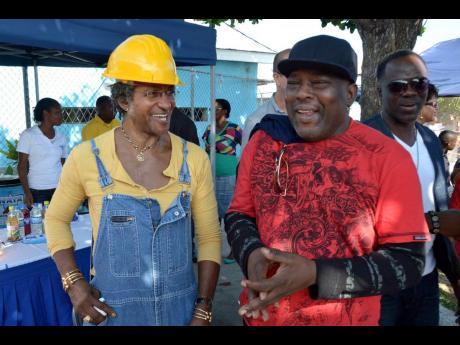 Sly Dunbar and Robbie Shakespeare (right) of Sly and Robbie.

Robbie Shakespeare, one half of the powerhouse rhythm duo of Sly and Robbie, has died.

A close associate confirmed his passing to THE STAR a short while ago.

Shakespeare had reportedly been ailing for some time and had undergone surgery related to his kidneys. He was living overseas and was in hospital in Florida.

In July last year, he placed at Number 17 on 'The 50 Greatest Bassists of All Time list', compiled by the prestigious Rolling Stone magazine.

When The Gleaner reached out to the Grammy award-winning bassist at the time, he said he was humbled by the recognition,

"Bwoy, I appreciate the fact that others looking in can see what we are doing for the music. This makes me feel like a baby." The A-lister, whose fingers have lovingly stroked the chords on many hit songs for artistes, including Gwen Guthrie, Grace Jones, Dennis Brown, Gregory Isaacs, Bob Dylan and Peter Tosh, spoke passionately of the value of hard work while subtly throwing shade at the 'entitlement' culture.

"No matter how much people hail Sly and Robbie as the legends, and despite two Grammy wins and 11 nominations, we never ever feel like anything we get in life, we must get it. There have been a lot of sleepless nights and 'eatless' nights, too. Nuff time we go to bed hungry, so we remember these things and take stock. There are so many other great bassists out there who they could have chosen, and yet they chose me, and I am grateful," Robbie Shakespeare told The Gleaner.