'Lick’ getting licks but not love 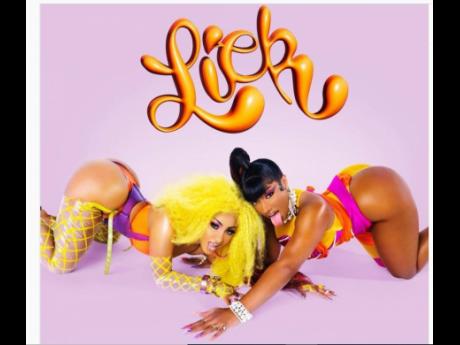 A photo posted to Shenseea's Instagram account, teasing the release of 'Lick, the colloboration with Megan Thee Stallion.

Lick, the most anticipated collaboration of the year, featuring Dancehall Princess Shenseea and Megan Thee Stallion, dropped Friday morning to much fanfare and disappointing reviews. As expected, within 10 hours, the video had racked up more than 457,000 views on YouTube, and counting.

But, while the views are impressive, it is the mixed reactions that have taken the spotlight. The overwhelming numbers of 'Shenyengs' seem to be quite underwhelmed, but they are still showing their loyalty. The comments on Shenseea's social media pages, as well as under the video, indicate that while Megan's verse was fire, Shenseea somehow, didn't lick her intended target. Lick is the first single from Shenseea's debut Alpha, which has a release date of March 11.

One user commented "This was the time for Shenseea to show the world her talent and this is what she chose to do?. I am not impressed. I think she needs a different team around her because whoever okayed this verse for her need a 'big lick', no pun intended."

Lick samples soca star Denise 'Saucy Wow' Belfon and Pupa Nas T's Work, which Shenseea performs in the song's hook. Listeners found this disappointing, commenting that the hook wasn't original and that they wouldn't have minded so much if Shenseea had "bodied her verse". They referenced some of her previous songs like Good Comfort and 4Play, opining that Lick was not up to that standard.

Over on Belfon's Instagram, fans urged her to make sure that she was "collecting those coins" in royalties.

One of Shenseea's fans tried to put the sample in perspective.

"Love where this sample has reached. Shenseea bringing these hype Caribbean classics to the front with this collab. Big up Murda beatz-producer for transforming the original hype song Put your back in it from Denise 'Saucy Wow' Belfon into this mean hot-gyal song."

However, other listeners were adamant that the song is sexy and questioned why others are trying to discredit Shenseea.

"Her lyrics were not as simple as some viewers are making them out to be. Megan and Shen's energy are what makes the song flow the way it did. The song will grow on y'all, just give it time to marinate," was one comment.