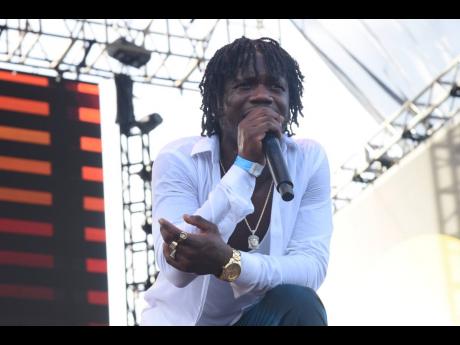 Fast-rising dancehall entertainer Jahshii has denied allegations that there is a feud between himself and fellow recording artiste Silk Boss.

Speaking to THE WEEKEND STAR, the First Nation artiste said, "Me nuh have nuh feud. The other artistes haffi feud with themselves, right now at this point in time."

Earlier this month, Silk Boss lyrically attacked him in the diss track Facts and he has since recently released another titled Runner, which speaks to Jahshii's lack of response. However, Jahshii said that he is not about to be forced into a lyrical war with Silk Boss or any other act who puts forward a diss track.

"Yuh see wid me and Silk Boss, like how dem say me ah trouble Silk Boss. No sah. Me have a platform weh me ah enjoy what current and what ah gwaan inna dancehall," he said, adding that he has no time for feuds as he was focused on propelling his own career. "Right now me a say First Nation and the movement and the rest of artiste dem on the team."

As it relates to historical feuds in dancehall such as Beenie Man and Bounty Killer, Jahshii agreed that lyrical wars and clashes have helped to push the dancehall genre further.

When asked about the possibility of entertainers doing friendly clashes, Jahshii said, "No friendly thing inna studio thing. Me nuh think clashes like that is serious".

"Don't get me wrong but there still needs to be clash in dancehall but on certain levels like fi clash with artistes weh deh pon a higher level," he added.

He said that in dancehall, the lyrical wars, clashes, and feuds generally end when the fans say so. The Prosperity deejay also compared himself to Merciless while paying homage to the late dancehall deejay.

"Memba say we a grow up like a warhead like Leonard Bartley [Merciless' given name]. Me like the song weh him say, ' a long time me a ole gallis' ... and Letter To Mama and dem ting deh," Jahshii shared.

Meanwhile, Jahshii said the summer is dedicated to performances as he recently appeared on Reggae Sumfest Festival Night One where he entered the stage singing the intro of incarcerated R&B artiste R Kelly's single The World's Greatest which he followed with his own hit single 25/8.

"A it we work for and we just proud of wi self. To the organisers, dem fi keep the show fi ever because it shows dancehall music and helps young talent. Who have dem talent fi show dem talent. Across the world it is a great platform [so] youths make use of it too," Jahshii said.