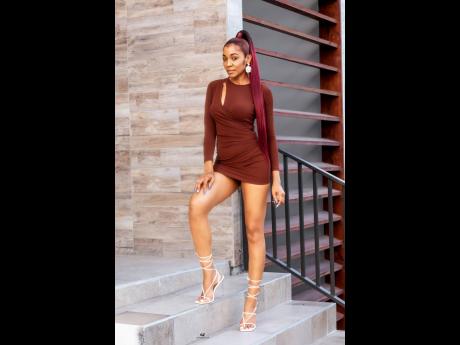 Veteran singjay D'Angel has never been the type of woman to sit and wait for opportunities to fall into her lap.

With her recent performance at the Pinyatas Lounge in Kingston, the entertainer has landed a partnership with the owners to host one night a week. She will be hosting the Seafood Fridays where she will engage with customers, as well as fans who turn out to support the event.

"When the owner approached me about working together and collaborating on Seafood Fridays, I could not resist. Firstly, I'm a big lover of food, I love cooking too, so anything with food, I am sold on it," D'Angel told THE WEEKEND STAR. "On a Friday, persons are always looking for somewhere to kick back, de-stress and relax in a good environment that has everything from food and drink, to ambience and entertainment. I will be responsible for meeting and greeting the customers. They know the energy I will bring and it's expected to be star-studded once I am hosting any event," she continued.

The Seafood Fridays event will also serve as a double launch as she will release the controversial track titled Pick The Man, which speaks about the topic of threesomes.

"It is seen as a taboo topic; men always have a fantasy of threesomes with their woman and another female, but me a twist the story now and say make me pick the man to join," D'Angel said laughing. "I really just want people to see the fun in it and just have fun overall."

D'Angel, whose given name is Michelle Downer, expressed the hope that she will get a chance to show her skills in the kitchen and maybe have a 'D'Angel Seafood Special' once more people become aware.

She said, "People can look out for D'Angel in the kitchen, at least one week it will happen. I will be tasting the food to make sure everything ready to meet the high standards we expect. I have always been encouraged to get into the business of food, maybe open a restaurant. But right now I am focused on this partnership and see this as a platform to do more in the future."

The entertainer and entrepreneur was in the headlines two years ago when she announced she was joining the provocative OnlyFans platform as part of a new business venture. D'Angel was criticised negatively for her decisions, but said people have come to accept that she has made a name for herself on the website.

"OnlyFans a gwaan man, I have my subscribers and it is just another income base, so people realise it is a business. My legs are my best attribute and it's doing well," she said. "I'm also preparing to relaunch the Xposed lingerie line. Sometimes as artistes with investments, we have to take a step back and look at our marketing strategies. As people know, I am very involved and at the centre of all my businesses, so I needed to do that."

D'Angel anticipates that the lingerie brand will be relaunched by next month.