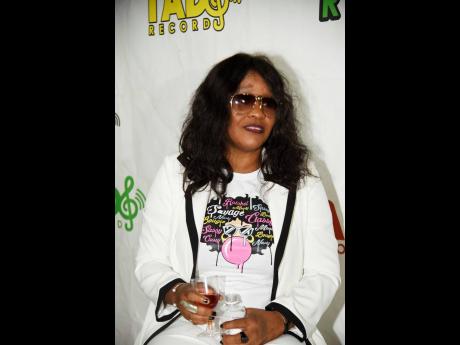 Tanya Stephens speaks at the launch of her latest album ‘Some Kinda Madness’, which was held on Thursday at Tuff Gong Studio, Marcus Garvey Drive, Kingston 11.

And it was an upbeat Stephens, dressed in a black and white pants suit and her signature shades, who held centrestage at Tuff Gong Studio on Thursday.

It was the private celebration of the release of the Tads Records-produced project and it saw Tanya in conversation with ZJ Sparks between performances of songs from her enduring catalogue, as well as the new album.

In between classics such as Yuh Nuh Ready Fi Dis Yet, It's A Pity and These Streets, as well as the new album songs including Diamonds in the Sun, a collaboration with Cedella Marley and Diana King, Stephens spoke about her journey to Some Kinda Madness.

"I had the freedom to do what I wanted on this project. We had 40 songs and eventually cut it down to 20. Junior Tads is all about the music and because it doesn't revolve around him, the music get this lift," she explained.

She shared with THE WEEKEND STAR the inspiration for the album's title, which she said was her therapy during the dreary COVID-19 lockdown period.

"From my observation of humans this is what happens among us. Everything is madness to me. Humans are the most complex and self sabotaging animals on the planet. We do everything that goes against our sustainability ... our survival ... on the planet. When we do something good it is to correct something really, really bad that we did before. So I think all of this is madness and if anybody disagrees with me it is okay. But this is my opinion of us. Everything we do is some kind of madness," Stephens said.

But it is the "kinda madness" that can also be a trailer load of fun and all of this is embodied in the song, Fifty, a collaboration with Patra, who Stephens made sure to shout out, in her absence.

It was one of the songs from the album that Stephens chose to perform and it is an ode to getting older gracefully with a promise to be better at 50 than at 40.

"When gal good, gal great!" the 49-year-old Stephens said, just stopping short of humorously beating her chest, at the end of the song.