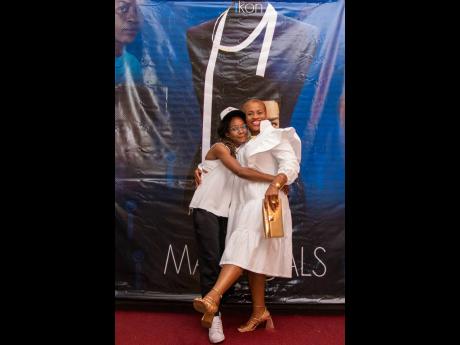 Grammy Award-winning artiste, Koffee, cleared her schedule recently to support her mother, Jo-Ann Williams, who made her acting debut in the short film, Raw Material.

The screening was held at the Palace Cineplex in the Sovereign Centre.

"It was amazing seeing mom onscreen, but it's nothing new because when I was growing up, I always viewed my mom as an actress. But it was refreshing fi see her inna 2022 in a film," Koffee told THE WEEKEND STAR.

Williams, who plays the role of Angie, who is a landlord, spends her scenes pleading with her tenant to pay his rent. As the unsettled bill grew, so did her frustrations, and she was left with no choice but to take action and seize assets. The movie premiere saw audience members offering a roaring round of applause for the showcase. Koffee lauded the director, Sosiessia Nixon-Kelly, and cast for an outstanding job.

"As a fellow creative, this is my first time seeing your work and I really enjoyed it. And I'm looking forward to seeing more from you, congrats," she said.

In a follow-up interview, she highlighted how proud she was of everyone, the director especially, while lauding the production. Although away on business, Koffe made it her point of duty to offer virtual support, encouraging her mother behind the scenes.

The mother-daughter duo exchanged exciting conversations as Williams kept her offspring up to speed with selfies on set.

"I always ask for them and me always boost her up an ah seh, 'Yeh, yuh look nice!'," she added.

Speaking of behind the scenes, the reggae sensation is currently working on an album, so fans will be hearing new music later this year or early 2023. Additionally, she is looking toward to hitting the stage in an upcoming school tour.

"The tour is islandwide and we should start by the end of October," Koffee added.