Sizzla happy with Grammy consideration for ‘Rise Up’ 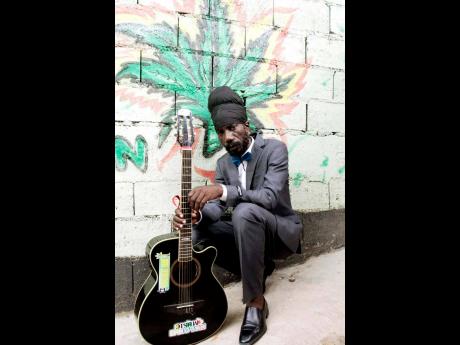 Nominees for the 65th Grammy Awards will be announced on Tuesday, November 15, and reggae singer Sizzla could be among the nominees for Best Reggae Album.

His album, Rise Up, has been selected by the Recording Academy for consideration and Sizzla, who received a Grammy nomination in 2014 for the self-produced album, The Messiah, is thankful.

"I would like to say thanks to the Most High Jah Rastafari for his divine inspiration, who had endowed me with the strength, love, life and intelligence in keeping my being wholesome and healthy for me to be able to deliver my messages of love and culture to the people of the world. I must say a special thanks to all my fans who've always been the ardent supporters of Sizzla ever since the genesis of my musical journey," Sizzla told THE WEEKEND STAR.

He added, "I would like to say thanks to each and everyone, especially those who've voted for this album, making it possible for the Grammy consideration."

Featuring 12 tracks and production by Kalonji Music Production and Blaqk Sheep Music, Rise Up was released on July 22. It has been described by music critics as "perhaps his best body of work yet". It delves into reggae, hardcore dancehall and a bit of hip hop. Listed among the tracks are the title track, When It's Gonna Stop, Jamaica No Problem, Crush On You and Hard Ears.

With close to 80 albums and counting, Sizzla's debut was titled Burning Up and he has since made huge impressions with albums such as Black Woman and Child, Praise Ye Jah, and Good Ways. As the indigenous president of the Nyabinghi Theocracy Reign government of the Rastafari nation, an ambassador of the Ethiopia Africa Black International Congress True Divine Church of Salvation and an ambassador to Jamaica in black culture, black heritage, black history, Sizzla was quick to connect his music with his spiritual message.

"[It is] not only my country and people who are steadfast, but a lot of other worldwide countries and people are steadfast in righteousness and the advancement of their people, and having people being connected to our culture and our music and supporting us in whatever space and fields of this music is something not easily attained," he said.

"I expect Sizzla to continue in the path of his Majesty, teaching the people of the world through his music and help in advancing the welfare and well-being of a people so poised at getting to the world and having the right things done."