Kalado eager to get back on international stages 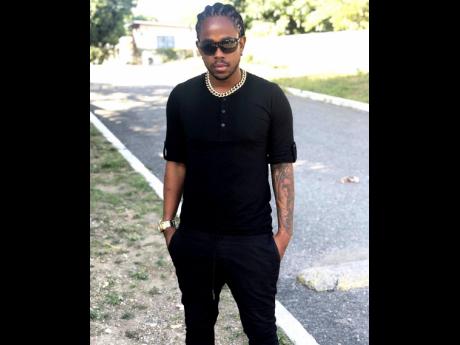 Despite having his US visa revoked several years ago, dancehall entertainer Kalado has not given up on the idea of performing on international stages again.

"I have all intentions to perform globally," he told THE WEEKEND STAR in a recent interview.

"It would be great to perform for an event like the Super Bowl half-time show - or on a globally televised stage like that as the main act. But I'm not only aiming for the US, as my fans are all over the world and I have to try to reach everyone one of them," Kalado continued.

Having recovered from an injury which happened in August, the deejay has been rediscovering some of his favourite pastimes, including drawing, bird hunting, fishing and travelling across the island "to enjoy what nature has to offer locally".

"I'm what you call an all-rounder. I'm an artiste as well as an artist (so) anything creative, that's me. Depending on the vibe I'm getting, I'll participate in outdoor activities. Other than that, I've just been experimenting more on the production side of music and exploring new sounds and different genres of music to show reggae-dancehall listeners, and music lovers in general, a better understanding of what makes me an international artiste," Kalado shared.

He also said that he has been investing some time in learning more about video production and editing as he prepares to release more material in 2023.

Earlier this year, the deejay released the hardcore dancehall track, Back Road Combo, which garnered over two millions views on YouTube. The follow-up track, Flowers, which paid tribute to living dancehall sports and reggae icons, including Chris Gayle, Usain Bolt, Alkaline and Popcaan, was expected to have an equal or even greater impact.

"Unfortunately, negative has become the new positive in music," Kalado explained. "That's what people are gravitating to now. The Flowers song is a great production, not because it is mine, but it has an everlasting message that will always be relevant. I believe in due time, it will reach the right ears and audience will grab on to it."

In September and October, Kalado returned with songs for his female fans, With You, a love song, and a high-energy dancehall production titled Drop Yuh Panty, which he claims is 'the hottest gyal segment' song.

"When it comes on to bringing back the fun aspect of man and woman dancing together inna di party, [the song] is it. So far the people dem love it, so I'm just giving what they want to hear. I'm always working (so) I have a lot of unreleased songs. I just want fans to get up to speed with all my new music," Kalado said.