Jinyus asks fans to ‘Memba Good’ his past 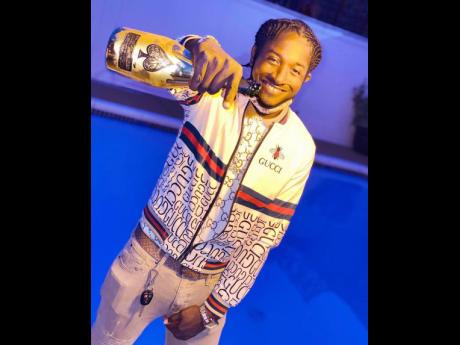 Recording artiste Jinyus has graduated from the classroom freestyles which made him a viral sensation over a decade ago, to recording live albums in studio.

Reminiscing on the good times as a student at the Bridgeport High School, the 32-year-old said that he wants to remind the dancehall community of "a talent that is unmatched," he told THE WEEKEND STAR.

"Back then, it was all for fun but it evolved into what became known as 'Bakk A School' Wednesdays. Some persons might remember a recording of me freestyling in a classroom, where the students kept receiving a warning from a teacher that we would suffer consequences if we didn't silence the cheering. That's when we had the idea to take the freestyle session to the back of the school," Jinyus shared.

He said that the current generation of young acts are not as engaging with their schoolmates or the wider public despite having bigger platforms to become viral sensations.

"Between 2010 and 2015, after YouTube became more mainstream, the video got up to 200,000 views and not even dancehall music videos were getting that. There were even established acts who used lyrics from our freestyles," he said. "I addressed one of those things on my recent live album. I've always been complimented for my performance as an artiste who can freestyle - to the point where radio personalities and DJs mostly played the freestyle recordings, and I wanted to highlight that side of my talent while remind them of the content from back then."

The album titled Memba Good was recorded at a studio in Queens, New York, as Jinyus performed for a private audience. It was produced by JTG Records and released on September 12. Throughout the album, Jinyus can be heard telling the audience to 'memba good' past songs for which he became recognised for his lyrical prowess.

The Portmore-raised, New York-based artiste calls out several names in the business as if it were a clash, counteracting various statements that were made about him in the past. The dancing track on the compilation, Mek It Work, was released simultaneously and he performs it twice during the live performance. Going forward, Jinyus is aiming to produce a catalogue including mainstream genres rap and hip hop along with dancehall.

"It its entirety, Memba Good is a stage show performance, decorated with crowd responses and a backing band. I think it is a rare production, never done before for a dancehall entertainer, in the sense that the performance was also to spark controversy. Hopefully, it will reach the ears of those who I want to hear it, and persons who just love dancehall," Jinyus explained.