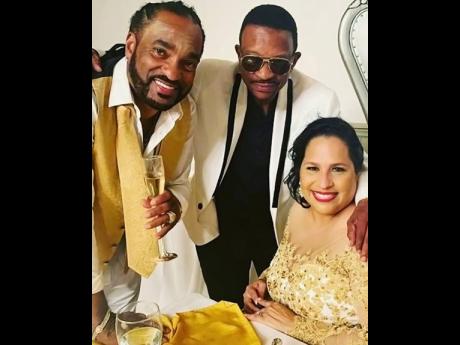 Ed Robinson (left) and his bride, Joanna Marie pose with producer Hopeton Lindo, who was instrumental in the couple reconnecting after 35 years.

The event was held with the family and several colleagues from the entertainment industry in attendance. The ceremony was held on the beach at the Lake Worth Casino Ballroom. The reception took place in the Fairfield Inn & Suites By Marriott. Reggae crooner Ambelique belted out a rendition of Unforgettable for the first dance, while veteran artiste Anthony Malvo serenaded the bride at the groom's request. For Chinloy, known in music circles as Joanna Marie, it was a dream come true as the two met over 40 years ago.

"We've known each other since I was 12 years old, and we used to work together, doing commercials at Peter Couch's studio. I had my eye on him but I was too young," she said, giggling.

"Then years later, Hopeton (Lindo) called me and said Ed invited me to come to his show in December 2018. It was the first time that Ed had seen me in 35 years, and at the venue, he said, 'I am going to marry you' and I was like 'Whatever'. So this is like a fairy tale, almost four years later, we are now married and it's great because I have been in love with him for years," she said.

Robinson is best known for his reggae cover of Bob Dylan's Knocking on Heaven's Door. Chinloy, who is of Venezuelan and Jamaican heritage, has recorded a number of singles including Hush Darling and Close to You, and did background vocals for the late Garnett Silk. The newlyweds will be releasing a duet called We Made It on the Irie Pen label.

Among those sharing in the happy event were musician/producer Willie Lindo; his son, singer Kashief Lindo; singer Richie Stephens; radio personalities Richie B and Gary G, as well as Patricia Chin of VP Records.