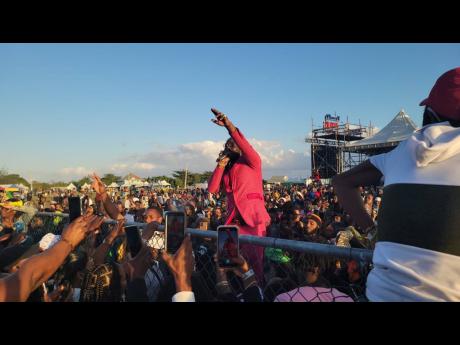 After a year hiatus, the 2023 staging of Rebel Salute ended with not only a bang, but a blue drum pan.

Closing the show at 7:27 on Sunday morning I-Octane traversed the general audience and gave his performance atop the water vessel for the entirety of his set.

Even calling vendors into play, the artiste, clad in a sparkly fuchsia suit, gave a 20-minute performance before his microphone was disconnected.

Not being dissuaded by the lack of sound, he gave an a cappella rendition of his hit song Lose a Friend.

I-Octane cursed the first expletive of the festival. There was speculation that that was the reason for the impromptu end to his set, but the artiste was unconvinced.