Where Are They Now: Aldith Ellis ready to give back to table tennis 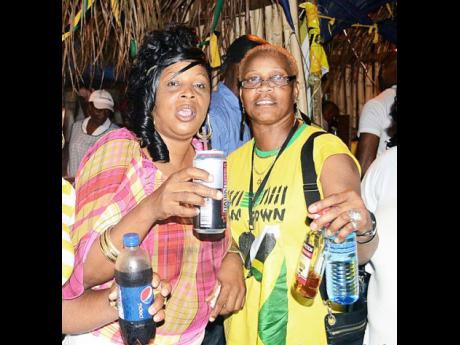 Contributed Aldith Ellis (right) passing time with a friend on a recent visit to Falmouth, Trelawny.

Where Are They Now:

In the mid- to late 1970s, Trelawny had two of the most revered names in local table tennis - former Caribbean female single champion Anita Belnavis and former national men's champion Courtney Wilson, who were established stars in the parish.

During that era, 16 year-old old Aldith Ellis, who hails from a tough inner-city-style community on the outskirts of Falmouth's town centre, burst on the scene.

Her amazing raw talent caused many to see her as the natural replacement for Belnavis, who was in the twilight of her career at the time.

"I was born at Compound, which is next door to the Elleston Wakeland Centre," said the Ontario-based Ellis.

Ellis, who was a natural talent in the early days, was soon spotted by Bobby Scarlette, an officer with the Social Development Commission in Trelawny at the time.

He took her to the late Reverend Earl Thames, who was in charge of the parish's table tennis programme then.

Within a year of being exposed to formal training by Thames, Ellis had emerged as the national Under-17 champion, upstaging seasoned players who were there long before her talent was spotted.

"I was strong and I hit the ball real hard," said Ellis. Her power was a feature which caused former national player Sandra Rettie to remark, " When she hit the ball, it stayed hit."

For Ellis, one of her few disappointments in the sport was not winning a national senior championship title, which proved quite difficult with class players like Belnavis and Ingrid Spence to contend with. She said Belnavis was hard to beat.

"At that time, table tennis was played at a very high quality," recalled Ellis. "Anita would just chop back the ball all day. Even umpires were frustrated doing a match involving Anita. Nobody had the patience like her."

Ellis, who visits Jamaica as often as she can, is appalled by the current state of the Elleston Wakeland Centre. She cannot understand how the centre is closed and now only accommodates football.

"What is happening at the centre is nonsense. Sports gave me an opportunity to get a high-school education and I believe the children of today should have the same opportunity," said Ellis. "Today, sports is a profession to so many people ... we should be creating opportunity for more youngsters to excel."

As a part of her efforts to give back to the sport, she has planned an Aldith Ellis-Anita Belnavis Business House Table Tennis Competition for this July in Falmouth.

She hopes it will be a first step in the revival of table tennis in the parish.