Jelly man 'chops off' a piece of Sumfest 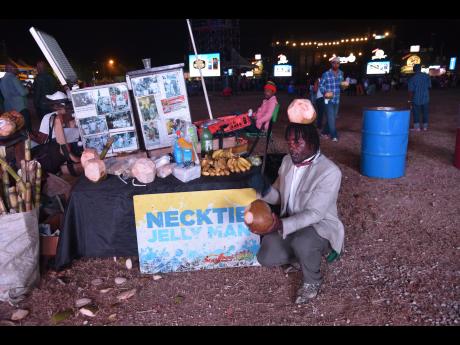 The Necktie Jelly Man from St James shows off his unique coconut-chopping skills at Reggae Sumfest.

Cambridge resident Garth Sinclair was one of the most popular vendors at Reggae Sumfest, due, perhaps, to his mode of dress and his coconut-chopping skills.

In his bid to stand out from the crowd, Sinclair dons his jacket and necktie to events where he sells his coconuts, resulting in him attracting the nickname 'Necktie Jelly Man'.

He told THE STAR that he has been consistently vending at major shows in the west, including Reggae Sumfest and the Jamaica Jazz and Blues Festival, which was last held in 2015.

"I have been coming here to Reggae Sumfest for 11 years. I am from Mount Salem, but I am living in Cambridge. These coconuts that I am selling come from Portland," Sinclair said.

"It is so awesome. It is so good, you know. I like coming here because all my customers who come to Sumfest everybody just love to see come to see the necktie jelly man chopping the coconut blindfolded and everything. I do blindfold, head-top; all five pon my head one time," he added.

Sinclair was well-prepared for the event. His cart was decorated with newspaper articles and posters advertising his business. Ripe bananas and sugar cane were among his offerings and, according to him, business was brisk.

"Sales are good. It is awesome. I cannot complain. If I come and I sell one or I sell two, I give thanks because it is so good; it is so great," he said.

His necktie-wearing marketing strategy has worked well, he says, resulting in some of the biggest names in Jamaican music visiting his stall to purchase coconuts over the years.

I-Octane. They come here to my office. This (cart) is my jelly office," he told THE STAR.