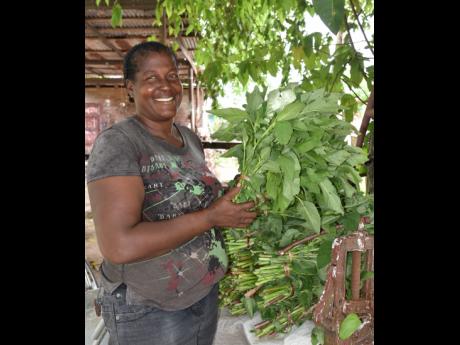 Calaloo farmer Elaine Johnson, of Sheffield, supplies her produce to some of Negril's finest boutique hotels. Here she shows off some of her callaloo. 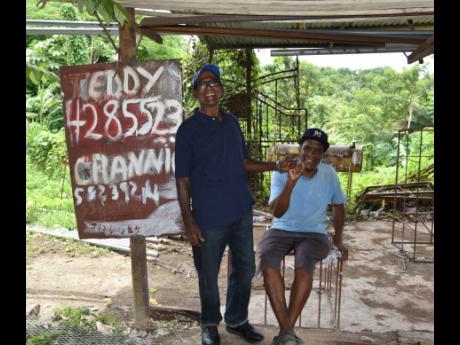 Lloyd Ackbersingh (left) and his friend, Kevin Pearce, were more than happy to pose for Western Star's cameras when we journeyed to the community last week.
1
2

The farming community of Sheffield in Westmoreland is a classic example of nice and easy and clean and green.

Nestled against the Negril Great Morass, Sheffield is also bordered by the district of Logwood in Hanover and the Westmoreland communities of Springfield, Silver Spring and Ketto.

According to retired truck driver Lloyd Ackbersingh, he relocated from another community in central Westmoreland and settled in Sheffield in the 1970s. He said he has developed an eternal love for the village and its people.

"Sheffield is a very peaceful community. You don't have much crime and so on. People work and the younger people go Negril to get jobs. It is very, very fruitful here," he said. "Di people loving and dem nice, man. If stranger come here, dem take care a you. Mi live here fi years; it come like mi bawn yah.

"Back in the days, the community people dem used to work a morass, even dung yah so, dem use to plant like carrot, cabbage and after dat dem all start plant ganja, too," he said bursting out in laughter.

Acbersingh said he was one of the truckers who, years ago, worked on the straightening of the Sheffield roadway, which he said initially had a lot of twists and turns.

"We all had to move some graves when we a straighten up dis road. It was like a foot track. Going to Negril to go up that hill, it wasn't that road. We newly cut that piece. It is a long history inna Sheffield yaah man. Big community," the senior citizen said.

Sheffield is home to the Negril Hills Golf Club, a primary school and two basic schools. It is ranked along with Cave Mountain and Orange Hill in Westmoreland as among Jamaica's best ganja areas.

"The morass gives good weed, but at special time of the year, like when dry season come, it better dan di rain time. Dat time it produce a whole lot, from October straight back to March," he said.

Elaine Johnson, a callaloo farmer, is also very proud of her community.

"Sheffield is a nice community to live in. Wi love the farming - vegetables, sweet pepper, cauliflower, lettuce, cabbage, callaloo. Mi deh do it over 20 years. I have the commitment to deliver callalloo at a hotel and two restaurants. You have to make sure you have it everytime dem want it," she said.

The mother of five said it has been hard to get her children interested in agriculture.

"Dem no like callaloo; dem feel say it degrading, so a me one haffi dweet," she said.