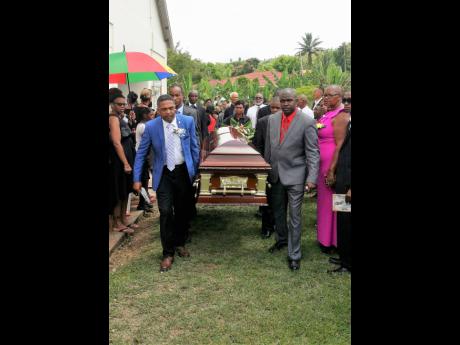 George Henry photo Pallbearers taking the casket with the body of Hillory Carnegie-Elliott from the St Luke's Anglican Church to the hearse, following her service of thanksgiving.

It was a rather hot and sunny Saturday morning on August 26 when scores of mourners, headed by Member of Parliament Richard Azan, turned out at the small St. Luke's Anglican Church in Sanguinetti in Clarendon to pay their respects to the late community worker Hillory Carnegie-Elliott, who passed away on July 28.

There were glowing tributes paid to Carnegie-Elliott, and words such as dedicated, willing, hard-working, and committed were used to describe her.

In his tribute, Azan told mourners, especially members of the family, that Carnegie-Elliott had an energy like that of a giant.

He shared that she was one of the most committed women in her church and her community, and added that her community and the Sanguinetti Primary School, where she served as a member of the board of management, have lost a great worker.

Chairman of the board of management at the school, Hugh Cross, told the gathering that the late mother and grandmother had a repertoire of skills, and that she was a woman who could do almost everything based on her culinary expertise.

"She helped well at the Sanguinetti Primary School. She was a committed and most loyal member of the board. Her passing has left a painful feeling in her community," said Cross.

Isaac V Johnson, a member of St Luke's where Carnegie-Elliott worshipped and was a member of the choir, told the gathering that his late church sister served her church with dedication.

Johnson pointed out that she was always in Sunday school and was always willing to do whatever was needed to be done at the church.

"She was a most faithful member of her church choir; home chores never prevented her from attending choir practices. She was a real source of inspiration to church members. She loved the Lord with a passion," said Johnson.

Delivering the eulogy, Carnegie-Elliott's cousin, Denise Ellington, said the deceased was the fourth child for her parents, Suzan and Eli Carnegie.

She added that Carnegie-Elliott was born in Sanguinetti and was a well-loved resident who lived a fulfilling life.

"She had a rock-solid faith (and) she was very useful with her culinary skills, which she used to satisfy the taste buds of family and community members alike," said Ellington.

Carnegie-Elliott, whose body was interred in her family plot after the service, has left behind to cherish her memory, husband Donald Elliott, father Eli, two sisters, four brothers, children Terry-Ann, Shelly-Ann and Sheldon, grandchildren, and numerous other relatives and friends.