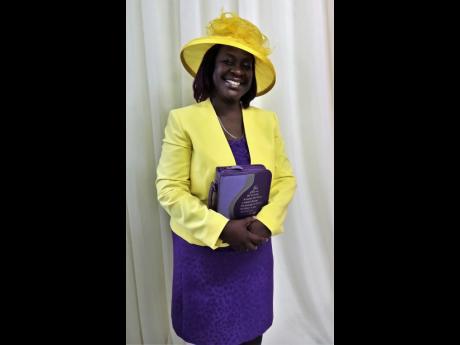 There are persons whose parents ensured that they knew the way of the Lord from an early age, attended Sabbath or Sunday school, and that they missed very little church activities.

But although such children know much about the Lord, they sometimes refuse to make a commitment to follow Him early in their lives.

Minister Denise Johnson-Knight was quick to declare that she was one such person.

"My late dad was a minister in this great church. I was brought up in the church but I was not saved until later when I was in my 20s. My late mother always prayed for me that I would give my heart to the Lord. And from a tender age they used to call me an ordained evangelist," said Johnson-Knight.

Johnson-Knight shared that she ignored the call to surrender to the Lord earlier than she did. But one night she went to her bed after plans were made to attend carnival at Chukka Cove in St Ann with her sisters. But the Lord had other plans for her.

"While I was in my sleep I had a vision in which I saw a tall man. In the vision, the man had one foot on land and the other in the sea. The man said to me, 'Denise, time shall be no more'. I got out of my sleep, got on my knees and started to pray," she said.

From that day on, the young Johnson-Knight decided that it was high time that she started to follow the Lord. She pointed out that it was not long after that she fully surrendered her life to her Maker and took her water baptism.

She also testified that one of her most miraculous moments as a Christian took place during the birth of one of her sons.

She had a terrible disorder, and had to be transferred from the Mandeville Public Hospital to the University Hospital of the West Indies.

"While I was at the hospital, the Lord came down and touched my body, and I survived the disorder and gave birth to a three-pound premature baby boy. Everybody thought they would have lost me. But because of the prayers and the consistency of the brethren, I am here today to declare that I shall not die, but live and declare the works of the Lord, amen and amen," said Johnson-Knight.

She has served at the Cobbla New Testament Church of God in various capacities, including choir director and Sunday school superintendent.

She is currently the head of the public relations department, and is also enrolled at the Bethel Bible College, where she is pursuing studies in theology.